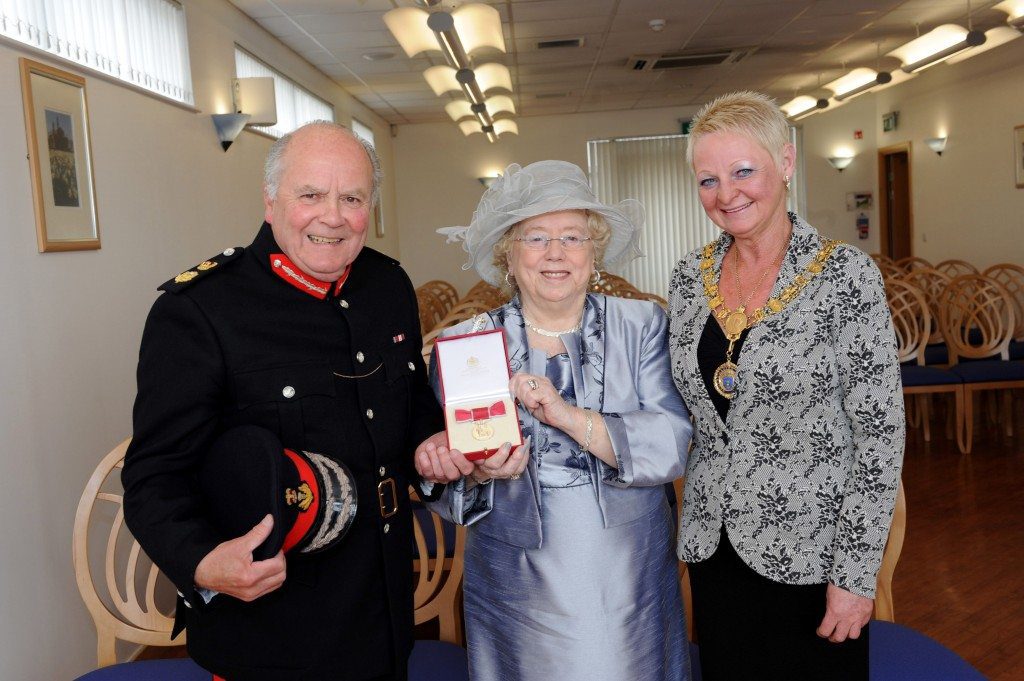 A Johnstone woman has been presented with the BEM (British Empire Medal) in recognition of her campaigning efforts on behalf of social housing tenants.

Nanette Reid, from Johnstone, was presented her medal and certificate by Lord-Lieutenant Guy Clark, the Queen’s representative in Renfrewshire, at a special ceremony held in Renfrewshire Council’s HQ in Paisley.

The ceremony was also attended by Renfrewshire’s Provost Anne Hall, and Nanette’s family and friends.

Lord-Lieutenant Clark said “I was delighted to present the British Empire Medal to Mrs Nanette Reid on behalf of Her Majesty The Queen at Renfrewshire Council Headquarters on 14th May.

“This accolade is only awarded to those who have demonstrated dedicated service at the highest level, and who have made a real impact to the community. “This richly deserved Award has been granted to Mrs Reid for her considerable contribution for the promotion of the rights of tenants to good quality and affordable housing. It is the first BEM to be awarded in the district of Renfrewshire since the reintroduction of the medal in 2012.”

Nanette Reid was overwhelmed with pride to receive the award. “This used to be an award given to soldiers so I am really honoured to been recognised with this medal. Our soldiers are truly brave so to receive an award that recognising their achievements is very humbling.

“My voluntary work in social housing all started when my own home was changing ownership and I became involved by putting forward the rights of all tenants to help shape the new landlordship. I enjoyed it so much that I continued to be part of many tenancy boards and I’ve no plans to stop anytime soon.

“I am overwhelmed to be receiving this award as I don’t really think I am doing anything special. My role allows me to meet and work with a lot of different people and we each bring something to the table. I am just a small part of that.”

Provost Hall said “I was delighted to be a part of this special event in recognising one of our residents who works tirelessly for others in the community. Nanette’s passion and enthusiasm are an inspiration to many.

“Nanette has helped shaped social housing within the local community and her work continues to do so today.”[/vc_column_text][vc_separator icon=”star”][vc_column_text]

IMAGE 1: Lord-Lieutenant Guy Clark presents Nanette Reid with the BEM at the ceremony.

IMAGE 4: Nanette Reid’s was joined at the ceremony by son Derek, his wife, Karen, and their children, Heather and William