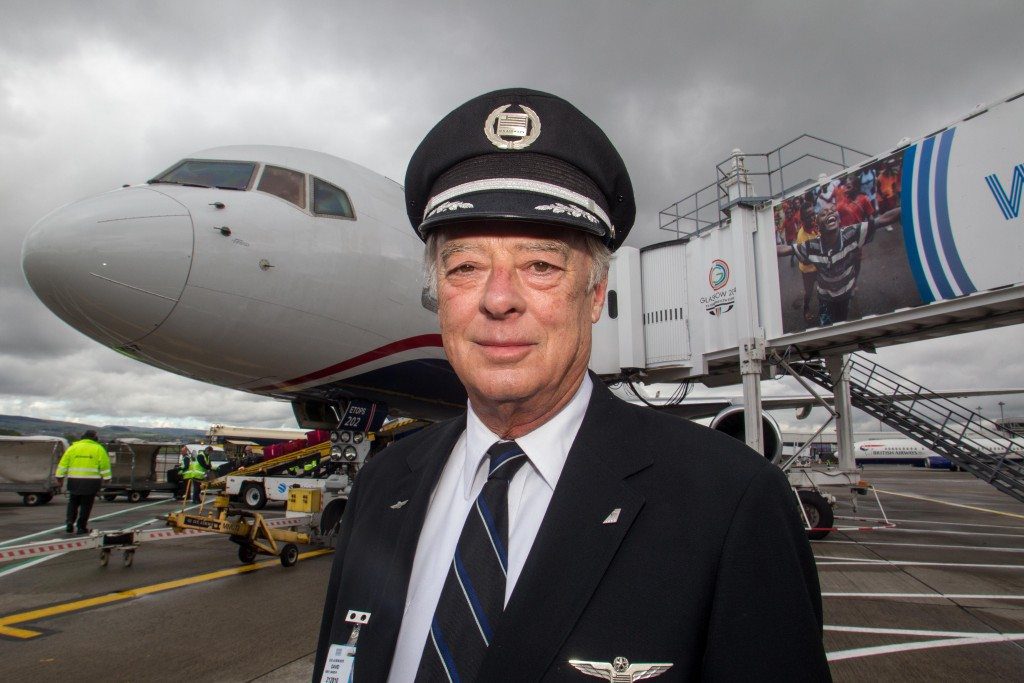 It was a double celebration for US Airways today (Thursday 8 May) at Glasgow Airport which provided a water cannon salute to mark the 10th anniversary of the airline’s Glasgow to Philadelphia service.

It was also a landmark occasion for Captain David Gray of Gloucester, Massachusetts, who, after 36 years of service, took the controls of what was his final flight with the airline, which is now part of American Airlines. US Airways’ inaugural Glasgow to Philadelphia service first took to the skies on 11 May 2004 and since then it has carried in excess of 430,000 passengers between the two cities. The United States represents the largest international market for Glasgow and each year 85,000 trips are made by American visitors, boosting the city’s economy by almost £40 million.

Earlier this year, US Airways confirmed it would bolster its 2014 schedule from Glasgow with an additional 19 round-trip flights. This was in response to a marked increase in demand for the trans-Atlantic service and it comes as Glasgow and Scotland prepare to welcome the world for events such as the 2014 Commonwealth Games and the Ryder Cup.

Amanda McMillan, managing director of Glasgow Airport, said, “Since its launch in 2004, US Airways’ Glasgow to Philadelphia service has gone from strength-to-strength. The route is hugely important for Glasgow as not only does it generate significant inbound tourism for the city and Scotland as a whole, it provides the business community with a direct link to what is the world’s largest economy.

“US Airways is clearly committed to Glasgow, as evidenced by it recent decision to add further capacity, and I’d like to congratulate the airline on reaching such an important milestone in what has been a hugely successful partnership with Glasgow Airport.”

Suzanne Boda, American Airlines’ senior vice president, Asia, Canada, Europe and Cargo, said: “We warmly welcome the great send off for Captain Gray by Glasgow Airport. Scotland is a hugely important market for American Airlines and US Airways, highlighted by the additional 19 flights we have added to Glasgow this season, and we value the economic benefits we bring to the city and its surroundings.”

Councillor Gordon Matheson, Leader of Glasgow City Council and Chair of Glasgow City Marketing Bureau, said: “US Airways’ decision to significantly increase capacity on its Philadelphia to Glasgow route strongly reflects the popularity of the service. It is a positive and welcome step which demonstrates the airline’s commitment to the city, ahead of what will be a momentous year for Glasgow, and reinforces Glasgow Airport’s position as Scotland’s long haul gateway.

“With the eyes of the world turning to Glasgow in 2014 as we host the Commonwealth Games, and with the Ryder Cup at Gleneagles, we are discussing plans with the airline about continuing that activity early next year, with a focus on highlighting the ease of access to Glasgow and Scotland for North American visitors and rolling out our new US website; peoplemakeglasgow.us.”[/vc_column_text][/vc_column][/vc_row]

Glasgow News? Daily Updates part of our network
Paisley Museum becomes the ‘Museum of Light’ to celebrate Museums at Night...