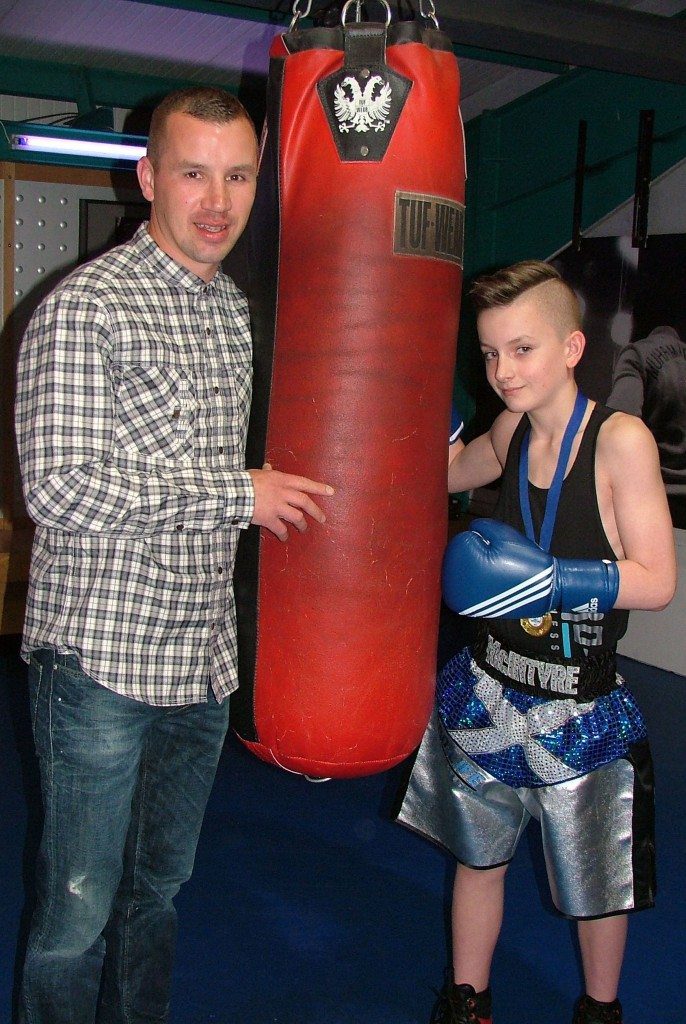 A rising young boxer being trained by former British welterweight champ Kevin McIntyre was a real knockout when he donned his new lucky shorts and went on to lift his first title after just four months in the sport.

Paisley’s Kieran McIntyre – Kevin’s nephew – proved he could pack a punch when he took to the ring in the elite Scottish Schoolboy Championships and won the 38kg category title.

The 12-year-old Todholm primary pupil puts his winning performance down to the snazzy customised shorts bought by Renfrewshire Sport Charity which operates the Pro-Life Fitness Centre in Paisley to raise funds for ACCORD and St Vincent’s hospices.

Having his uncle Kevin, one of his sporting heroes in the corner, also spurred Kieran on to a magnificent performance in his bout to arrive back to his home town a winner…just like his uncle before him.

Kieran is the first sportsman to win sponsorship from a special Sports Fund which was set up by RSC in the wake of well known fitness expert Alex Whelan retiring and gifting his gym to the charity which receives all the profits from the operation.

And already the young puncher is showing the potential to follow in the footsteps of Kevin who is training and mentoring him.

Kieran who was delighted to win his bout at the event at the Tollcross International Swimming Centre in Glasgow said: “It was great to get a medal. It’s the first one I’ve ever won in my life for anything. I usually just get them for participating not being a winner so this is a good feeling.

“The shorts made a huge difference, really they did. They were hand made for me and cost £180 and made me feel like a real fighter. I felt great in them and they gave me a real boost and I felt more confident going into the ring. They are definitely my lucky shorts.

“ There’s no way I could have got them without this sponsorship from Pro-Life so I just want to say thanks and I’ll stick in at the training.”

A delighted Kieran, a member of Renfrewshire Amateur Boxing Club, added: “I thought about giving it up but not anymore. I train for two hours three nights a week just now so you have to be committed to it.

“Since I started boxing just a few months ago I’ve had five fights with four wins and one loss. This latest one has made me believe in myself a bit and think that with a lot of hard work this could be the sport for me.”

Kevin a former British, Scottish and Celtic Welterweight champion is backing the young star to go far as long as he works hard and takes care of himself.

He said: “If you look good, you feel good and you box good. Your confidence just soars so what Kieran says is right. You are more self-assured if you look and feel the part so I’m sure his new shorts did play a big part in the win.

“Kieran’s done really well at training, working hard and putting the hours in at the gym and that’s what being a great sportsman is all about. He’s still young so we won’t be too hard on him. This sponsorship deal with Renfrewshire Sports Charity will make a huge difference to Kieran and his family. Without something like this kind of support achieving your goals is always so much harder.

“Pro-Life helped me through my career and now they’re giving my nephew the support he needs to go on and be a success which is a wonderful gesture.”

Kieran’s proud dad Garry, 32, added: “We are all delighted for Kieran. We never expected him to have so much success so quickly but this big win has motivated him to stick in at it. And those shorts – he never stops talking about them.

“We are obviously grateful to Pro-Life for backing Kieran in this way and it is an honour for him to be the first recipient of sponsorship from the new RSC.”

Gayle Brannigan, chief executive of RSC, said: “I am delighted to be part of this historic award. Kieran is the first sportsperson to be sponsored by the charity. It’s an exciting and vibrant time for everyone and he is exactly the type of person we are looking to help.

“He’s young, new into his sport, has ambition and commitment and is developing into a dedicated boxer. I can’t believe he’s already a champion after such a short time in the sport and we will continue to help him out whenever we can.”