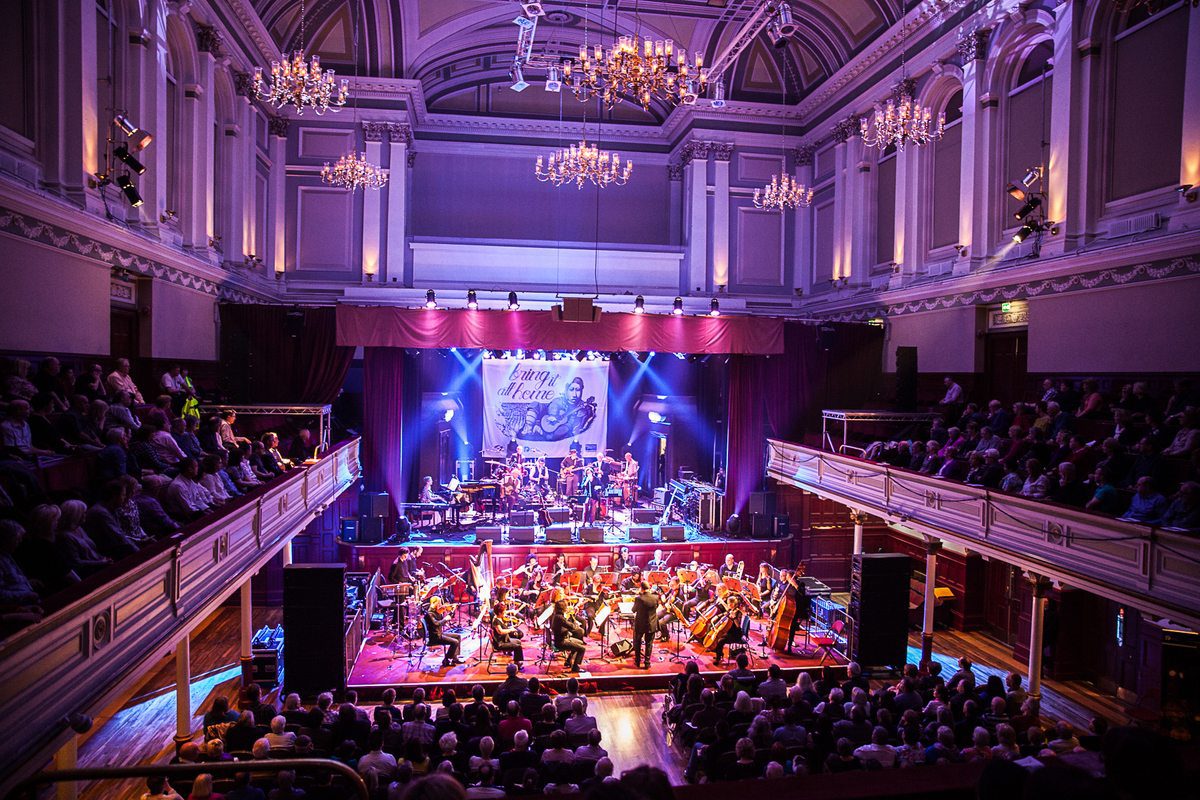 [vc_row][vc_column][vc_column_text]A star-studded line-up led a powerful musical tribute to Paisley songwriting legend Gerry Rafferty during a unique event to honour the singer in his home town.

Paisley Town Hall provided a spectacular setting as a spellbound capacity crowd was treated to an evening of Gerry’s greatest hits by his family, friends and fans.

The show – on what would have been Gerry’s 67th birthday – was directed and compered by his lifelong friend and collaborator Rab Noakes.

A 24-piece orchestra made up by members of the RSNO added an extra musical layer as songs spanning Gerry’s career – from his early Humblebums days through to his million-selling solo work – were reworked.

The concert opened with the aptly-titled New Street Blues – inspired by his home town – with international hit such as Baker Street and Right Down the Line following.

Between songs, artists talked of how Gerry’s work had helped inspire theirs, with Rab Noakes adding a personal touch with the tale of how the pair had first met as up-and-coming musicians – introduced by Billy Connolly – back in 1969.

The concert was the centrepiece of a week-long festival of music at various venues in Paisley, all inspired by Gerry’s songwriting legacy.

It was timed to take place alongside an exhibition into his life and work, which will run at Paisley Museum until 18 May.

Each artist will perform some of their own songs, plus other material from their favourite Scottish performers.

The remaining tickets for that show are available on a buy-one-get-one-free basis from www.bringitallhome.co.uk or by calling 0300 300 1210. They will also be available on the door at Paisley Town Hall from 5.30pm on Saturday.

Renfrewshire’s Provost Anne Hall – who hosted a short reception for artists and guests in the town hall after the show – said: “It was a wonderful occasion and there could be no more fitting setting for this concert than here in Gerry’s home town.

“This was a great way for the people of Paisley to celebrate the life and work of one of the town’s greatest sons.

“We are very proud of the town’s cultural and musical heritage and Gerry’s work takes its place at the forefront of that tradition.”

The event is being organised by Renfrewshire Council, with support from Homecoming Scotland, Creative Scotland and the Rafferty family.[/vc_column_text][vc_separator icon=”star”][/vc_column][/vc_row]