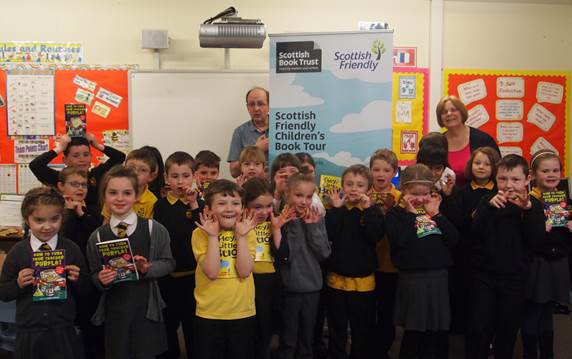 Renfrewshire pupils had a close encounter with poet James Carter.

Primary School pupils in Renfrewshire have been getting lyrical this March (17th -21st) as prize-winning poet James Carter toured schools in the area, combining music with poetry and science to enthuse students with the power of words.

As part of the Scottish Friendly Children’s Book Tour 2014, 1,114 primary school pupils were invited to take part in James’ interactive, musical show, which visited ten schools across Renfrewshire and East Renfrewshire. Every school bought copies of James’ books and we estimate over 400 poems were written by pupils inspired by the events. (Pupils from Neilston Primary in East Renfrewshire show off their new books following a visit from poet James Carter, as part of the Scottish Friendly Children’s Book Tour)

James is the author of ten poetry books for children, including Greetings Earthlings (Macmillan), How to Turn Your Teacher Purple (A & C Black) and Time-Travelling Underpants (Macmillan) and five critically-acclaimed creative writing books for teachers. He was a major contributor to the 2009 Cbeebies animated poetry series ‘Poetry Pie’ and runs INSET Poetry days for primary teachers to give them the confidence and skills they require to facilitate creativity.

Having visited over 1100 schools in the last twelve years and worked as a writer-in-residence at numerous primary schools, James is enthusiastic about bringing his work into the classroom. He believes that writing poems is a dynamic way to get children interested in playing creatively with words.

“Wow! One of the most exciting weeks I have had in twelve years as a roving poet. Why? The Scottish Friendly Children’s Book Tour was brilliant. What’s more, Scottish audiences – teachers and children – are just the best!”

“James Carter’s world of poetry and music has been a tremendous success across schools in Renfrewshire. Scottish Friendly is delighted to have played a part in bringing such an inspiring and engaging writer to young people. We’re sure they’ll be talking about this for months to come!”

“The Scottish Friendly Children’s Book Tour with James Carter last week was excellent. James really made his work come alive for his audience and almost every school reciprocated with poems, stories and performances of their own. It was a joy to watch pupils from P2-P7 be inspired by poetry and I think we’ll soon have some excellent local poets on our hands!” The Scottish Friendly Children’s Book Tour is run by Scottish Book Trust, Scotland’s leading agency for the promotion of literature, reading and writing and is sponsored by Scottish Friendly, Scotland’s largest mutual with over 150 years of experience. The main aim of the Tour is to encourage children’s love of literature through inspirational author visits, which bring their books to life.