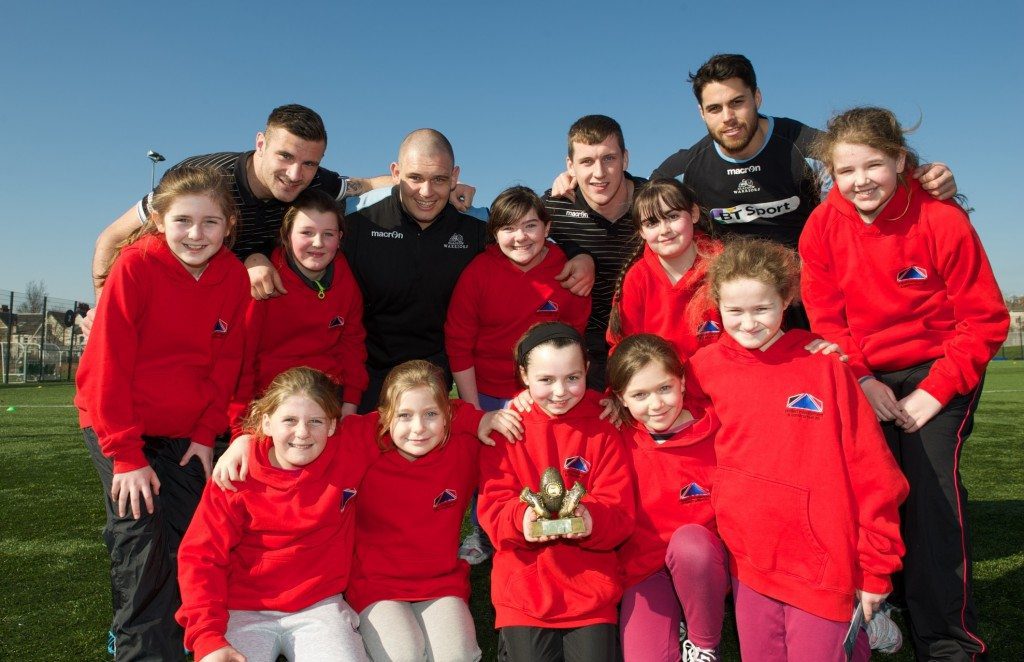 Renfrewshire kids find their Warrior side.

Glasgow Warriors were kicked into touch as Renfrewshire’s pupils dominate on their home turf.

Over 300 pupils from Renfrewshire’s primary schools have enjoyed a day of competitive rugby at the Scotstoun Stadium in Glasgow as part of a rugby festival organised by Renfrewshire Council.

The celebration marked the end of a six-week training programme, giving pupils from 11 schools the chance to put their newly acquired skills to the test at the home of the PRO12 side.

The council’s rugby programme is delivered in school by its team of development officers with support from five modern apprentices.

Pupils start by learning the basics before moving on to more advanced skills as the weeks progress. They complete the six-week course by taking part in a competitive tournament to demonstrate their grasp of the game.

Rugby Development Officer Lindsey Smith said: “It was a very successful event and the biggest primary school festival we’ve held to date. Having the Warriors and Scotland players there, joining in with them, was a great reward for the kids and hopefully the inspiration they need to continue their involvement with rugby, even if that’s as a club supporter”.

As one of the fastest growing sports across Renfrewshire, and with the School of Rugby based at Paisley Grammar, there is plenty of opportunity for pupils to become more involved and emulate those who they met at the event.

Councillor Jim Harte, convener of Renfrewshire Council’s Sport, Leisure and Culture and Policy Board, said: “I’m delighted we’ve been able to give so many school pupils this opportunity, which is a direct result of the council’s investment into grass-roots rugby. Working with Scottish Rugby we’ve been able to appoint five apprentices, which have helped us to grow participation in rugby across Renfrewshire, at all levels.”