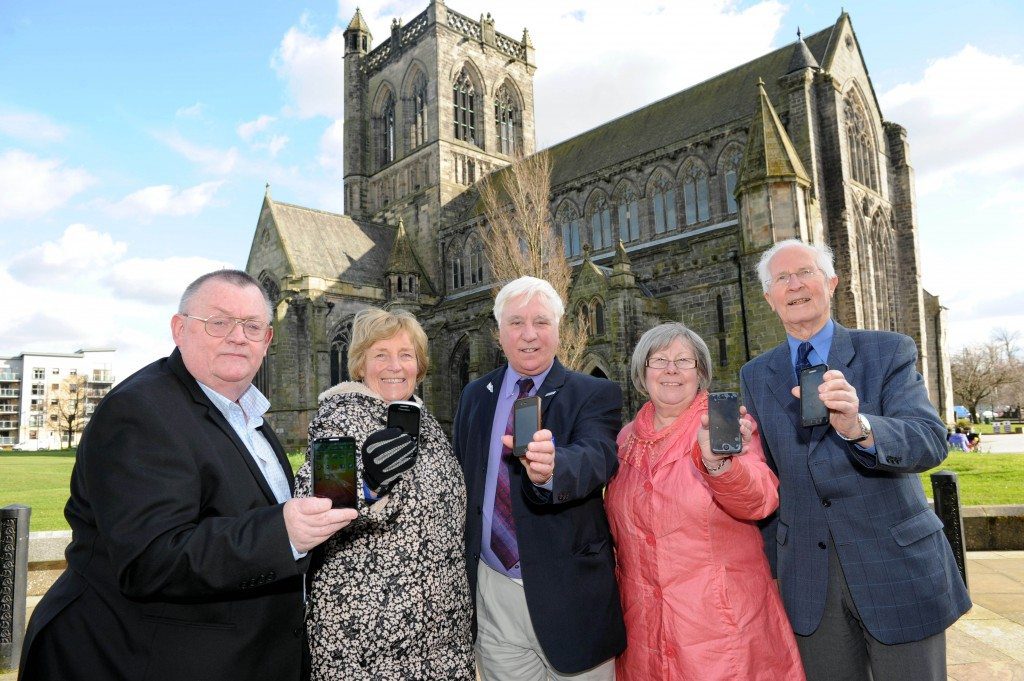 History-lovers are being encouraged to be a tourist in their own town thanks to a new mobile phone app which acts as a virtual guide to Paisley’s best buildings.

The Look Up Paisley phone app offers pictures and audio from ten important heritage sites around the town for residents and visitors alike.

The sites featured are – Paisley Abbey, town hall, the Russell Institute, the arts centre, the snail in a bottle site, the museum and library, Coats Memorial Church, the grand fountain, Sma’ Shot Cottages and Paisley Cross.

The free-to-download app has been available in iPhone format for a couple of months, but has now been released for Android users too. App users will find each site has accompanying audio footage telling the story of the building’s history – meaning the user is talked through the town’s hidden secrets, such as the network of tunnels that form the Abbey Drains.

Many of the audio clips are voiced by staff and volunteers from tourist sites and by local residents.

To launch the app, Councillors Terry Kelly and Bill Brown, Convener and Deputy Convener of the council’s Planning and Property Board, were joined by Sma Shot Cottage volunteers June Kennedy and Cath Mitchell, and by the Abbey’s David Goldie.

Councillor Kelly said: “Paisley has a superb architectural heritage – the town centre has the second-highest concentration of listed buildings of anywhere in Scotland, behind only Edinburgh.

“This phone app is a handy guide to the pick of those buildings which will be of interest and use to residents and tourists alike.

“The Look Up Paisley name is a fitting one – because people have to literally look up when walking around the town to get the best view of the stunning detail and architectural treasures you may miss if only looking at eye-level.

“The council has big plans to use Paisley’s considerable heritage appeal to drive the regeneration of the town and boost tourism – and this phone app is another way for people to fully appreciate the value of what we have here.”

To download the app, visit the Apple store or Google Play store on your smartphone (assuming device is compatible) and download it from there.

Glasgow News? Daily Updates part of our network
Council stands by its commitment to help families