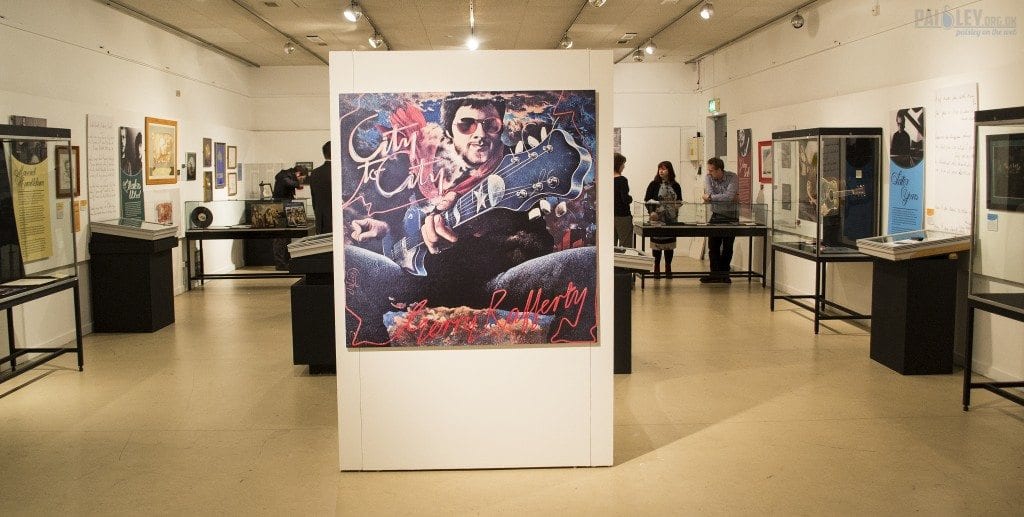 A unique exhibition showcasing the life and work of one of Scotland’s greatest-ever songwriters – Gerry Rafferty – is opening its doors in his home town of Paisley.

Bring it all Home: The Exhibition will feature items from Gerry’s career – from gold discs and guitars to hand-written lyrics to his biggest hits.

The exhibition is expected to attract interest from around the UK and abroad, given the worldwide fanbase of the man best-known for iconic songs such as Baker Street and Stuck in the Middle With You. Many of the personal artefacts have been loaned to Paisley Museum by Gerry’s daughter Martha, who helped curate the exhibition in her father’s memory.

Also on show will be original artwork from Gerry’s close friend and fellow Paisley Buddie John Byrne, who designed many of his album covers – while work by the artist from Renfrewshire Council’s own collection will also feature.

The free-to-enter exhibition will run at Paisley Museum from 7 March until 18 May and will coincide with an eight-day music festival in the town in April inspired by Gerry’s legacy.

Martha Rafferty said: “My father’s home town meant a huge deal to him and helped inspire a lot of his work, so it is fitting to be able to hold this event here in Paisley.

“There remains a huge deal of interest in his music from his fanbase throughout the UK and abroad – and I hope they will find plenty to interest them in the exhibition.”

Bring it all Home is being organised and promoted by Renfrewshire Council and is taking place as part of Scotland’s Year of the Homecoming 2014.

Renfrewshire Council Leader Mark Macmillan added: “Bring it all Home is a celebration of the life and work of one of Paisley’s best-loved sons.

“We are delighted to be able to host the exhibition and festival and are ready to welcome the visitors we expect them to attract. We would also like to thank Martha Rafferty and John Byrne for their generous contribution to the event.”

Bring it all Home: The Festival takes place from 11 to 19 April and includes a star-studded celebration of Gerry’s music featuring Martha and many of his friends from the music world, such as Rab Noakes, Barbara Dickson and Eddi Reader.

The gig – due to take place in Paisley Town Hall on Wednesday 16 April – sold out within three hours of going on sale last month.

The festival will also include appearances from Hamish Stuart (Average White Band), Midge Ure, James Grant, Karine Polwart and Kathryn Williams as well as an international concert and a series of free songwriting masterclasses.

Bring it all Home is supported by Renfrewshire Council, Homecoming Scotland, Creative Scotland, and the Rafferty family.

All photographs above were taken for Paisley.org.uk by Alex Slaven Photography.

Bring It All Home at Paisley Museum
Scroll to top