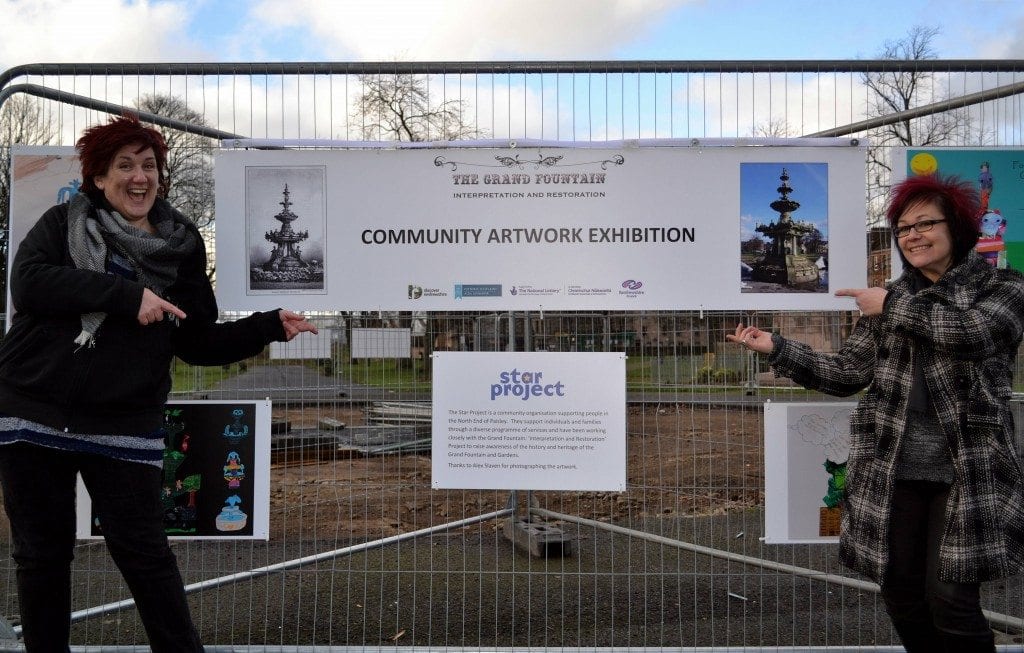 Paisley’s under-repair Grand Fountain is being put in the picture by community artwork inspired by the project to restore the spectacular A-listed structure to its former glory.

The intricate cast-iron fountain – the centrepiece of the town’s Fountain Gardens – was dismantled and taken away for restoration last year as part of a year-long project to bring it back to life.

The structure – which dates back to 1868 – will be brought back on site and reassembled over the next few months and restored to full working order by the summer. And the fencing round the fountain site has been brightened up by artwork themed around the structure’s shape and history, produced by members of a nearby community group.

The STAR Project is based in Wallace Street and offers a wide range of support services – such as counselling and befriending – to residents in the north of Paisley.

The artwork was unveiled at a ceremony attended by local ward councillors, and members of the STAR Project and the Friends of the Fountain Gardens Group, as well as council staff.

Councillor Terry Kelly, convener of the council’s Planning and Property Policy Board, was at the unveiling and said: “Paisley has a built heritage to be proud of and the fountain restoration project will see one of our architectural gems preserved for future generations.

“Having been gifted to the people of the town by the Coats family almost 150 years ago, the fountain still stands as a living reminder of the town’s proud thread-making past.

“One of the great things about this type of project is the opportunity it provides for members of the community to get involved, and learn more about their own town’s history.

“The STAR Project’s members have produced some bright and eye-catching designs and I am glad we were able to put them on display in the park for the public to see.”

The £650,000 Grand Fountain: Interpretation and Restoration Project is being funded by the Heritage Lottery Fund, Historic Scotland and Renfrewshire Council.

The next stage of the work will see a state-of-the-art underground pumping system installed to allow the fountain to work again.

The year-long restoration project has featured other community work including an ironworks seminar and an ongoing filming project with UWS.

The eight-metre-high fountain is recognised by Historic Scotland as being of national importance and is the only one of its kind, distinctive for its intricate detail and statues.