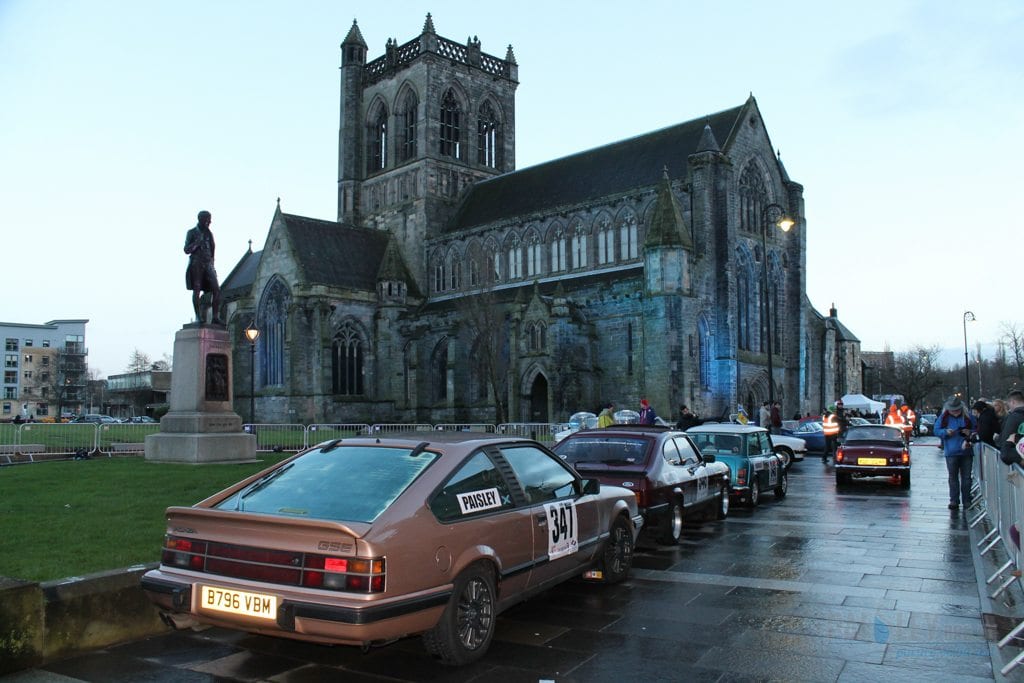 Thousands turn out in Paisley to see cars set off for Monte Carlo.

Paisley went classic car crazy this evening as a crowd of around 10,000 turned out to see magnificent machines from through the ages for the Monte Carlo Classic Rally.

A total of 66 vehicles set off from outside Paisley Abbey on the 2,688km trek to the French Riviera at the only UK start leg of the world-famous event.

Drivers of lovingly-preserved Porsches, Triumphs, BMWs and Mini Coopers happily mingled with the public, who enjoyed getting up close to the vehicles.

Irish rallying legend Paddy Hopkirk – who won the rally 50 years ago – joined Renfrewshire’s Provost Anne Hall to wave the cars off on their way to Monte Carlo.

The ceremonial first car over the ramp was driven by 1960s female rallying trailblazer Rosemary Smith, partnered by Douglas Anderson, chair of the Rally Start Committee.

Paisley was joined by Stockholm, Oslo, Barcelona and Reims as a host venue as start legs set off from throughout Europe.

Renfrewshire Council closed off part of the town centre to allow the crowds to line the streets and get the best view of the cars.

The event had a family feel, with entertainment on stage from 4pm, featuring Clyde One DJs and live music.

There was also a link with Renfrewshire’s car-building heritage, with a display of Hillman Imps, built at the former Rootes car plant in nearby Linwood.

Renfrewshire Council Leader Mark Macmillan said: “Paisley is fast building a reputation as a venue for top-class town-centre events – and successfully hosting the Rally is just the latest boost to that.

“We were delighted to see the Renfrewshire public get behind the event in such numbers and am sure they enjoyed the spectacle of the occasion.”

Douglas Anderson, chair of the rally start committee, said: “Once again, the response from the public has been incredible.

“This is a truly international spectacle and we hope to bring the event back to Scotland in 2015.”

The cars were due to head south via the M77 and through Mauchline and Cumnock on their way to Monte Carlo, via the Channel Tunnel and over the Alps.