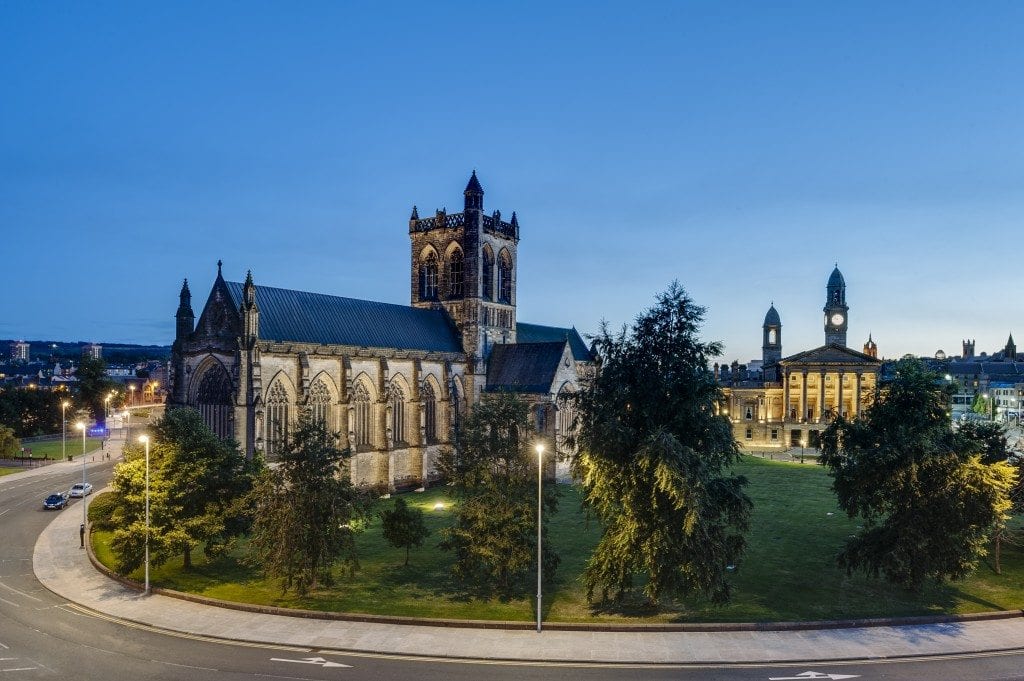 An ambitious multi-million-pound masterplan aimed at transforming Paisley’s future has taken its first step forward after being given the thumbs-up by councillors.

The Paisley Town Centre Asset Strategy contains a series of bold proposals which – if fully adopted – could increase the town’s tourist economy by £45m a year, create 800 jobs, and pave the way for a bid for UK City of Culture status. Councillors on the Economy and Jobs Board today (Wednesday) gave the green light for a series of detailed business cases to be prepared outlining how the plans can be brought to life.

And the decision has been hailed by Council Leader Mark Macmillan as ‘the start of something great’ for the area.

Councillor Macmillan said: “If these forward-thinking and exciting ideas are carried through, it would result in a total transformation of the town’s tourist potential.

“Today is just the first step, but it may be the start of something great, and the first step towards a better future for all of Renfrewshire.

“These plans may be aiming high but we have every reason to be talking the area up – the report makes clear just how much Paisley has to offer.

“I want the area to be all it can be and to fulfil its potential. What we have agreed today is a clear vision of how – with the right investment – we can do just that.”

The report describes Paisley’s heritage offerings – including more than 100 listed buildings, rare books and paintings, and the finest Paisley Shawl collection in the world – as being of ‘international interest and significance’.

The recommendations in the strategy – written after extensive consultation with experts – include:

– a multi-million-pound revamp of Paisley Museum to create a nationally-recognised Museum of Textiles, Fashion, Costume and Design;

– a study into possible new theatre space in the town, and further development at key tourist sites including Paisley Town Hall and the Coats Observatory;

– the creation of a Paisley Fashion and Design Centre, amid other improvements to the look of the town centre;

– work to investigate whether Paisley’s industrial legacy could be recognised as having UNESCO World Heritage Status.

Should this work be delivered, Paisley would be in a position to bid for UK City of Culture status in 2021, potentially following other areas which have successfully used heritage-led regeneration strategies in recent years, such as Derry-Londonderry and Hull.

The contest – run by the UK Government – is open to large towns and urban areas. Councillor Macmillan added: “We are already carrying out a lot of good work in the area – improvements to Paisley Town Hall, funding secured to preserve the Russell Institute, development under way on the former Arnotts site.

“But the plans agreed today would see us take that work to the next level.

“They will also see an expanded programme of cultural activity around the town, meaning we can build on our existing and successful events strategy.

“That saw us attract a crowd of 10,000 for the Monte Carlo Classic Rally last week, on top of the success of the Royal National Mòd and Spree festival last year – and we hope to attract more events of that calibre in future.”

Council officers will now prepare detailed plans for how each of the strands of the strategy can be made to happen, including exploring funding routes for where the estimated £90m investment could be secured.

These will be brought back before the council at a later date.