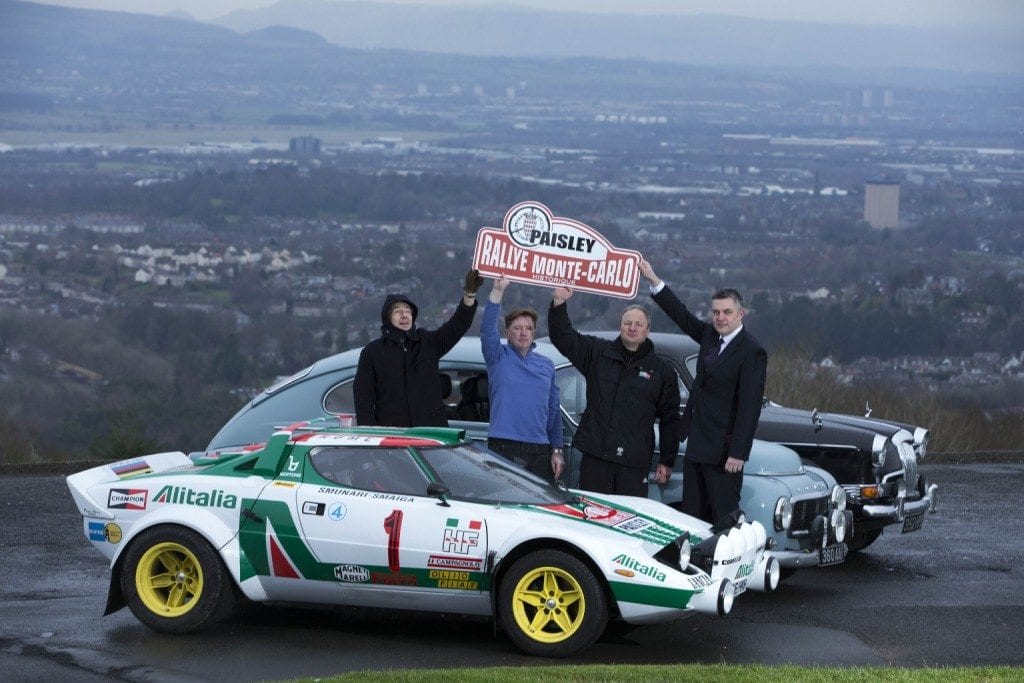 Paisley is preparing to roll out the red carpet for some very special visitors when one of world motorsport’s most glamorous events rolls into town this week.

This Thursday 23rd January, up to 100 classic cars from through the decades – including vintage Porsches, Jaguars and Mini Coopers – will assemble outside Paisley Abbey for the only UK start leg of the Monte Carlo Classic Car Rally.

Thousands are expected to turn out for the event, which will see live entertainment during the afternoon before the cars start to depart for France at 6pm.

Legendary racing driver Paddy Hopkirk and Renfrewshire’s Provost Anne Hall will wave the cars off on the 2,688km journey to Monte Carlo, via the Channel Tunnel and over the snow-covered Alps.

The Renfrewshire town has been chosen as one of five start points for this year’s event – with the others being Barcelona, Stockholm, Oslo and Reims.

This year’s event will also feature a special display of Hillman Imps – built at former Rootes car plant in Renfrewshire – which will be returning home 50 years after the first Imps took part in the Monte Carlo Rally.

Since the event returned to Scotland in 2011, more than 30,000 spectators have turned out to see the cars off. This year’s event is being hosted by Renfrewshire Council in partnership with the Rally Start Committee.

Renfrewshire Council Leader Mark Macmillan said: “We are delighted to be able to welcome this prestigious and world-famous event to Paisley and are anticipating a great day for the area.

“Being able to attract an occasion of this calibre is a reflection of Paisley’s growing reputation as a home for top-class events and the distinctive architecture of Paisley Abbey and Town Hall will provide a unique backdrop to the Rally.”

Councillor Macmillan was able to pick up a flavor of the Rally during a preview event this week, held on the Gleniffer Braes overlooking the town.

There, he met rally competitors including Malcolm Oswald, who is marking his 60th birthday by travelling to Monte Carlo in a 1.5 Riley which had been lying in bits in a garage for 37 years before being lovingly rebuilt and restored.

Malcolm said: “”My father was mad keen on the Monte Carlo rallies in the 1950s and I grew up with it. I always wanted to do it so I put my application in this year.

“The car was basically days from being scrapped. It lay in an awful state in a garage under dust and the last tax disc was 37 years beforehand. We’ve done quite a bit of work on it, and, if we can make it, it will be a wonderful feat.”

The event will see road closures in place in Paisley’s Bridge Street and Cotton Street. The cars will travel along the town’s Barrhead Road to the M77, then take the A76 though Mauchline and Cumnock on their way south.

Clyde One DJs will host the live entertainment from 4pm on the stage in Cotton Street, which will also feature the Kennedy Cupcakes dance troupe as well as music.

Free event parking will be available at Wallneuk and at West College Scotland.

Council pledges £150,000 to help residents in hardship
Scroll to top