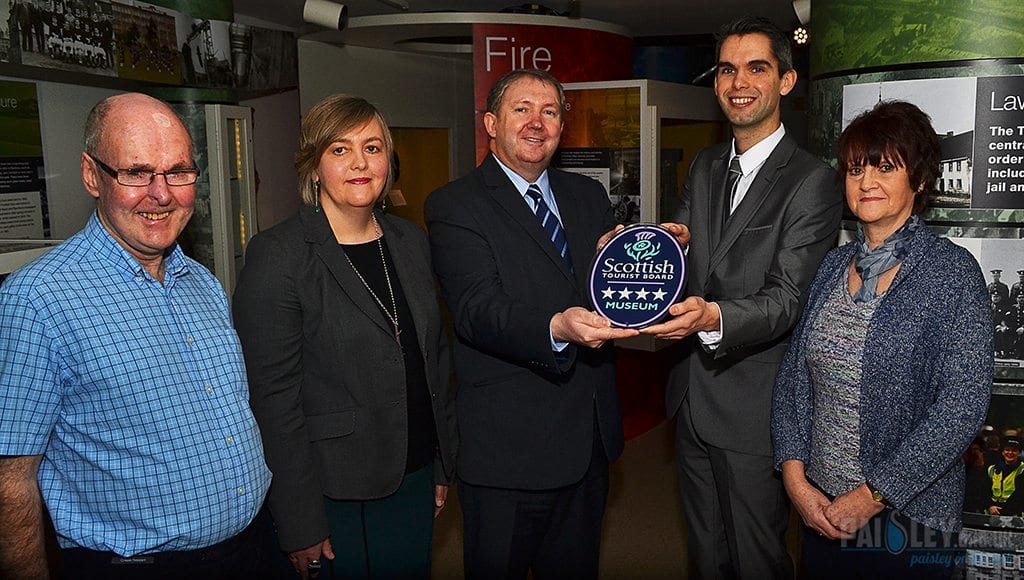 Renfrew Museum has become the latest visitor attraction in Renfrewshire to gain a top tourism award.

VisitScotland, the national tourism organisation, has awarded Renfrew Museum a 4 star visitor attraction rating which means that visitors can expect an ‘excellent’ standard.

Renfrew Museum joins Paisley Museum and the Coats Observatory in Paisley which have already gained the same high rating from VisitScotland.

All three facilities are run by Renfrewshire Council.

The new Renfrew museum opened in January 2012 alongside the refurbished Renfrew Town Hall after a £5.2m investment by Renfrewshire Council.

‘We are delighted to award Renfrew Museum a 4 star grading. The first glimpse of the building, on approach from the High Street, is very impressive and the building scores at the highest level with the condition and quality of the stonework being really outstanding. Good use has been made of space to ensure that a wide range of information and displays are in place.

“I’m confident Renfrew Museum is ready to welcome the world this year with so many high profile events taking place in Scotland such as the Commonwealth Games, Ryder Cup and Homecoming Scotland 2014 events on every doorstep and I hope all attractions and businesses will make the most of these opportunities.”

Councillor Jim Harte, Convener of Renfrewshire Council’s Sport, Leisure and Culture Policy Board, said:   “There has been a very positive response from the local community and visitors to the new Renfrew Museum.

“It’s very encouraging to see that reflected in this top award from VisitScotland.

“The museum has rapidly established itself as a key attraction for Renfrew and has been widely praised for the quality of the exhibits, the innovative design and the overall quality of the visitor experience.

“It’s a tremendous tribute to the work of staff, and the approach taken by the council, that this is the third of Renfrewshire’s major attractions to be rated as ‘excellent’ by VisitScotland.

“Alongside the modern Renfrew Museum, there is the restored grandeur of Paisley Museum and Art Galleries, and the oldest public observatory in Scotland, Coats Observatory in Paisley, built in 1883, and which now features a state-of-the-art digital planetarium.

“Renfrewshire has a proud industrial and cultural heritage and the council is doing all we can to make that heritage vibrant and relevant for future generations.”

Renfrew Museum’s displays are divided into four sections:  Earth, Air, Fire and Water. These tell the story of the town and its people from medieval times to the present day using objects, pictures, film and people’s own words.

The town’s shipbuilding, transport and engineering traditions are prominently celebrated.

One of the displays features a Merlin engine from a Spitfire plane built at Hillington.

Renfrew’s strong sense of community is reflected in the continuing support given to the museum by the Renfrew Museum Group which has been closely involved with the museum since before it opened in its new setting. The group also collates oral histories and delivers walks and tours of the museum.

Christine Black of the Renfrew Museum Group said: “We have developed a series of temporary exhibitions in the museum’s community exhibition case that celebrate the rich history of Renfrew.

“We had a great response on all these subjects in terms of historical information shared and the interest from visitors to the museum.”

The Bungalow One Chance Nights
Scroll to top