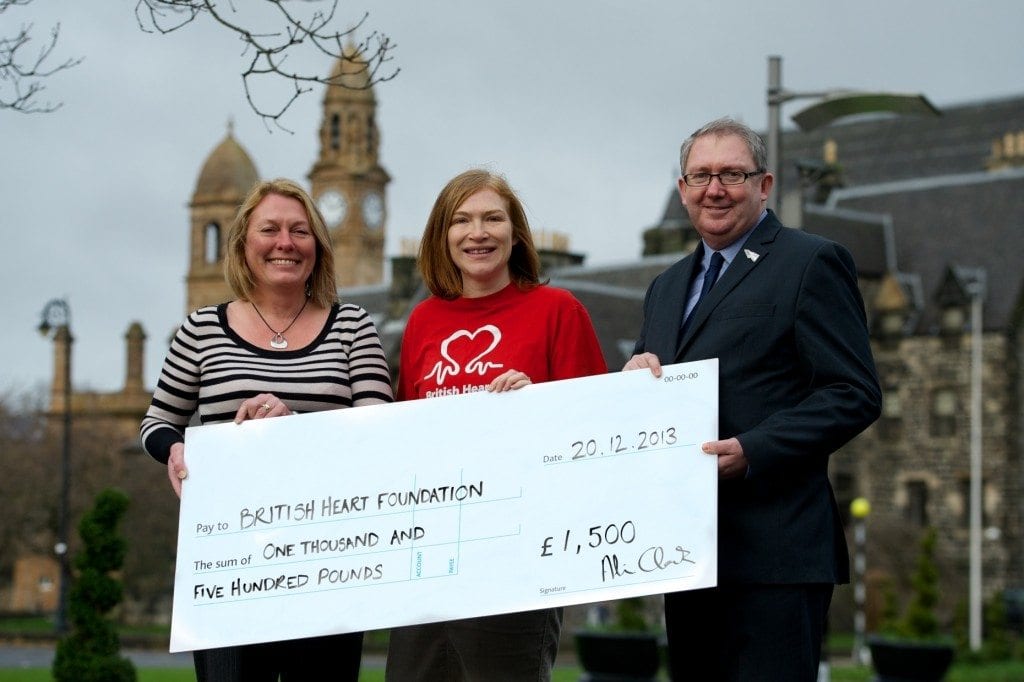 British Heart Foundation (BHF) Scotland has been presented with the proceeds from this year’s Paisley 10k.

Carole Nicol, Fundraising Volunteer Manager from BHF Scotland was on hand to receive a cheque from race organiser Renfrewshire Council and MEPC Hillington Park, official sponsor of the event.

(Please note this is for the 2013 event which has now passed, we will update the website soon with 2014’s entry)

Competitors who registered online donated a further £1,500 on top of their entry fees to join BHF Scotland in their fight for every heartbeat by supporting its Mending Broken Hearts Appeal.

Carole Nicol, from BHF Scotland said: “On behalf of the charity I’d like to thank the competitors, the organisers, the spectators and the sponsors; everyone who helped to make this year’s event the most successful yet.

“Competitors literally gave pound for pound – 1,500 runners donating £1,500. And not only that, they also got their hearts pounding too, which is just as important to us in our fight against coronary heart disease”.

Every year 160,000 people die in the UK as a result of heart and circulatory disease.

Councillor Jim Harte, Convener of Renfrewshire Council’s Sport, Leisure and Culture Policy Board said: “We want our residents to have healthy hearts and healthy lifestyles. The 10k provides people with incentive to get race fit, whether that’s as a fun runner or as a more serious competitor.

“It’s great to see the event growing in popularity, which means not only are we helping to raise more money for a worthy cause, more people are getting the message and getting active”.

MEPC Hillington Park has sponsored the race for the past two years. Marketing & Customer Manager, Alison Clark said: “Paisley is one of three BHF ‘Heart Towns’ in Scotland. We’re proud to sponsor the event because it allows us to support the ambitions of two great organisations that are committed to improving the wellbeing of Renfrewshire’s residents – many of whom are Hillington Park employees and who also enjoy taking part in this event each year”.

Paisley’s 10k is noted for being flat and fast, with a course that takes competitors through the historic town centre, along Paisley canal and Kilmacolm cycle track. The date of the 2014 event has been confirmed as Sunday 31 August 2014.

Other sponsors of the event include: