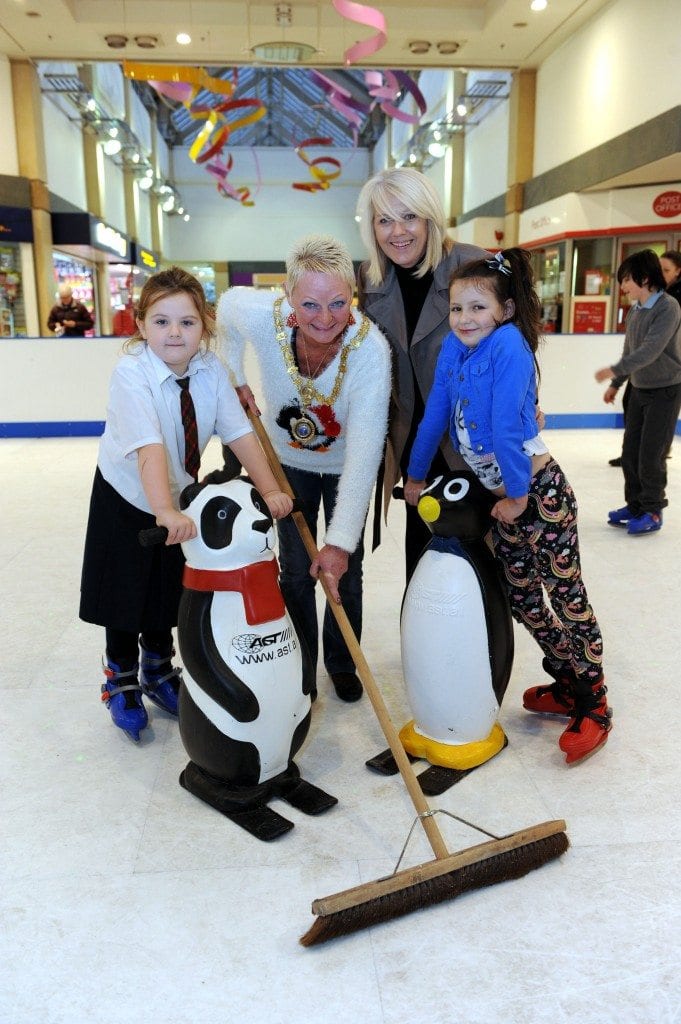 Provost and Piazza partner up for fundraiser.

Renfrewshire’s Provost Anne Hall has teamed up with the Piazza shopping centre in Paisley to raise money for a charitable cause close to her heart.

The Piazza paid Provost Hall the Living Wage to work in the shopping centre’s ice rink for the day.

The wage will be shared equally among the four charities – Renfrewshire Carers’ Centre, RAMH (Recovery Across Mental Health) and two hospices – Accord and St Vincent’s – chosen by Provost Hall to feature in a special charity giving scheme during her term as Provost.

Earlier this year, the Provost’s charity giving scheme was launched with an abseil from the roof of Renfrewshire Council’s HQ in Paisley. The event raised almost £5,000.

At the Piazza, Provost Hall worked alongside Ryan Rodden who took up the seasonal job in the shopping centre through Renfrewshire’s youth employability hub.

Provost Hall said: “I enjoyed working at the ice rink and I was pleased to be supported by the local people and local business.

“It is really important to me that fundraising events like today not only raise as much money as possible for the charities but show the good work taking place within the community and business.

“I also want to support the important work of Invest in Renfrewshire – Renfrewshire Council’s £8 million programme to support employment and business. It was great to meet and work with Ryan today. I am looking forward to developing further sponsorship opportunities with local businesses next year.

Maureen Hill, Centre Manager at the Piazza shopping centre said: “It was a pleasure to have the Provost work here and generate a real buzz within the centre. Shoppers were very supportive and the kids enjoyed themselves.

“We are pleased to be able to support the Provost in her aim to raise money for her chosen charities.”

The ice rink in the Piazza shopping centre is open Monday to Friday 12pm – 6pm, Saturday 11am – 6pm until the 4th January.