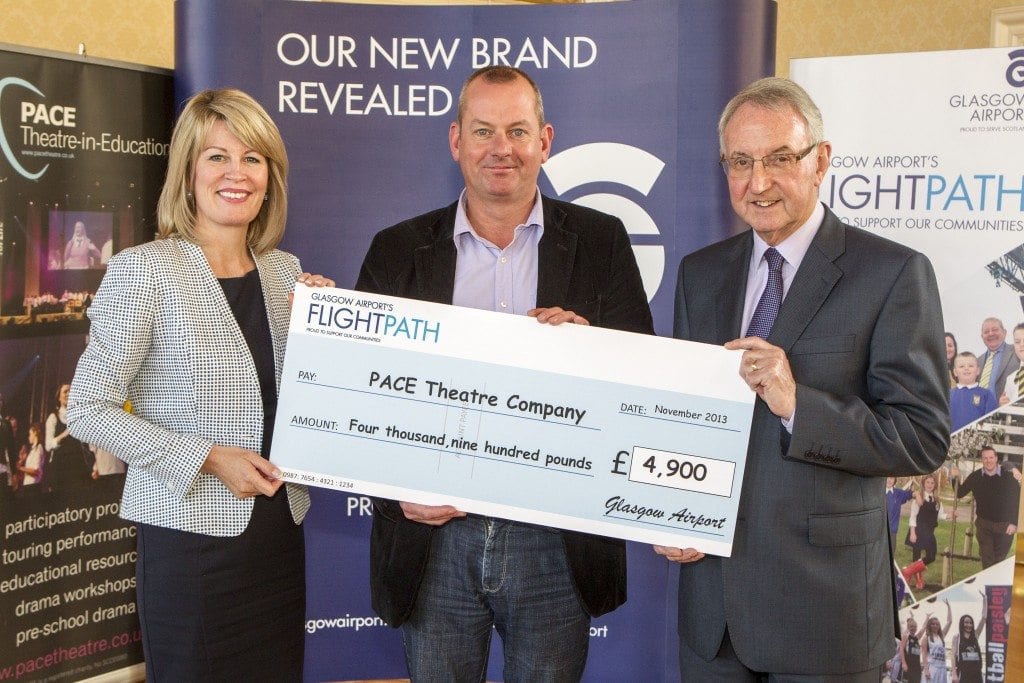 A theatrical production which educates young people on the devastating effects of disability hate crime will be delivered in Renfrewshire schools.

An award of £4,900 from the Glasgow Airport Flightpath Fund will allow the Paisley-based PACE Theatre Company to carry out the first phase of its ‘I Am Me’ initiative.

PACE founder and executive director David Wallace received the cheque from Archie Hunter, chairman of the FlightPath Fund, and Amanda McMillan, managing director of Glasgow Airport, at an event in Renfrew Town Hall to celebrate the success of the Fund. Mr Wallace spoke at the event about how the FlightPath Fund supported a previous PACE project to raise awareness of cyber bullying. Representatives of other organisations which have received financial support in the past also addressed the audience, which included MPs, MSPs and councillors.

The I Am Me play will be accompanied by discussion workshops and the intention is to raise awareness of what constitutes a disability hate crime, reduce the number of incidents and encourage more reporting of incidents.

PACE is working with partners Renfrewshire Council and Police Scotland on the project, which will be delivered in schools, community groups and disability support groups. A steering group will be set up to seek the views of young people and disabled people which will influence the design and direction of the productions and workshops.

David Wallace said “More than a fifth of the population of Renfrewshire is classed as disabled or having a long-term illness. Too often people with a disability become the victims of crime because of that and appear to accept abuse as part of daily life.

“It is estimated that 97% of disability hate crimes go unreported and the purpose of I Am Me is to bring about a clearer understanding of the effect that incidents have on individuals, perpetrators and communities. We are extremely grateful to Glasgow Airport for the financial support which allows us to get this project off the ground.”

Archie Hunter said: “I Am Me is a fantastic initiative and one that we are very proud to support. PACE is an extremely innovative organisation which uses theatre to engage with young people in Renfrewshire, raising awareness of serious issues in a way they can relate to. Disability hate crime is undoubtedly a big problem in our society and the PACE Theatre Company is to be commended for tackling it in a creative way.”

Amanda McMillan added: “It is important that the population around the airport can share in our success and it was very encouraging to hear from some of the groups who have benefitted from the Flightpath Fund. Listening to representatives of these organisations speak passionately about their work makes us even more determined to continue supporting our communities.”