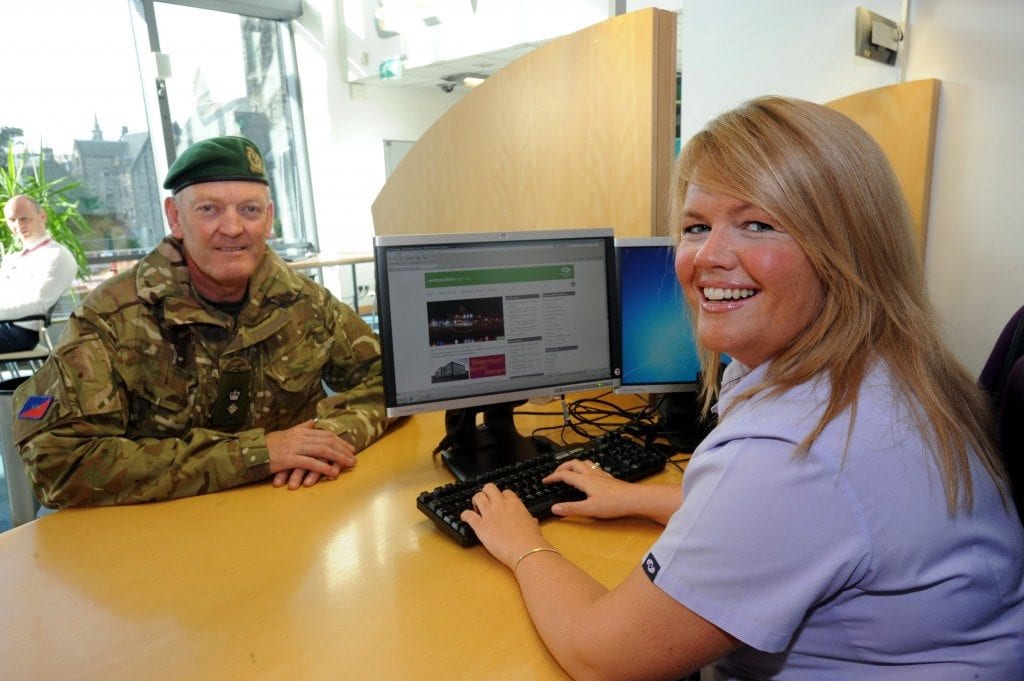 Councils team up to help out heroes.

The three councils, working with the Veterans Support Service, have introduced a new customer service initiative designed to make sure veterans get the help they need.

Customer service advisors at all three authorities have been trained to ask the right questions to identify veterans and ‘signpost’ them to specialist advice in housing, employment, benefits or medical treatment. The initiative was given a significant boost this week when the UK Government announced that it will receive £87,000 from the Armed Forces Covenant (LIBOR) Fund.

Monies raised from fines imposed on UK banks which manipulated LIBOR – the interest rate at which banks lend to each other – is used to support the Armed Forces Covenant, a pledge from public services to do what they can to ensure veterans are not disadvantaged.

Each of the three councils has signed the covenant in the past year and all participate in the Firmbase initiative to co-ordinate veterans’ support across the west of Scotland.

The customer service initiative was launched this month when elected members from the three councils met with Lt Col Neil Russell of the Army Personnel Centre. Lt Col Russell also spoke with Stacey Stuart, customer service advisor at Renfrewshire Council, to try out the new service.

Lt Col Russell said: “I’m in uniform today so it’s immediately obvious that I’m with the Armed Forces. But if someone walks in off the street and into a council office, how would you know if they’ve served in the forces? It seems so simple, but unless an advisor asks, then they might not get to the heart of what the person needs.”

“The enthusiasm and interest shown by all of the advisors trained has been to their credit and it’s clear they want to do what they can to help.

“Initiatives like this are so important to supporting veterans and I’m very appreciative of the resources all three councils have invested in making this happen.”

Brian Finch, Scottish regional manager for the Veterans Welfare Service, part of the MoD, said: “We provide advice to the ex-service community and service personnel. Young or old, they can get advice and help from us.

“It’s crucial that people in other agencies coming into regular contact with veterans understand this and can signpost them to us. We’re delighted to be contributing to this initiative and believe it will be of real benefit to our veterans.”

Cllr Anne Hall, Renfrewshire’s Provost, said: “Renfrewshire has a proud tradition of support for the Armed Forces and for service veterans. We’ve been home to the Erskine veterans’ charity since 1917 so we know how difficult it can be for those who have served to make the adjustment to civilian life.”

“I’m glad to see that we’re still finding new ways of helping our veterans and I hope this new initiative goes from strength to strength.”

Cllr Jim Fletcher, leader of East Renfrewshire Council, said: “The Libor Funding is a welcome boost and a recognition of our community covenant pledge and the innovative work we are doing with public, health and voluntary sectors to help service personnel, families and veterans access support.

“This funding will enable us to continue to assist our community fully and further strengthen the support given to East Renfrewshire’s in-service and ex-service personnel.”

Cllr David Wilson, depute Provost of Inverclyde Council, said: “We have a long and proud association with the armed forces in Inverclyde so I am delighted we are part of this service offering help and support.

“It is also an opportunity to promote better understanding and awareness of the issues facing veterans and their families and will be of real benefit to them.”