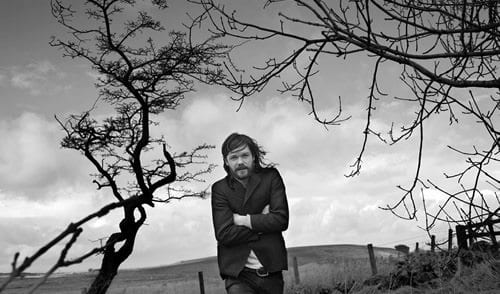 Don’t miss an intimate live performance from Roddy Woomble on 23 Oct as he performs tracks from his third solo album, Listen to Keep.

Familiar to many thousands of music fans as the front man in the Scottish rock band Idlewild, Roddy Woomble is also a celebrated solo songwriter and performer.

His first solo venture came in 2006 with the album, My Secret is My Silence; a record which won rave reviews throughout the music press and saw Roddy move away from the melodic rock style of Idlewild towards a softer, lyrical vein of songwriting. He was also the key instigator behind the acclaimed 2007 album Ballads of the Book, bringing together leading Scottish poets and musicians to collaborate on new songs.

Roddy went on to record and release the album Before the Ruin with Kris Drever and John McCusker in 2008, which they toured extensively around the UK to critical acclaim.

Woomble’s second solo album The Impossible Song and Other Songs was released on Greenvoe/EMI in spring 2011. It was written and recorded at the An Tobar Arts Centre on the Isle of Mull. Along with his band (Sorren MacLean, Seonaid Aitken, Gavin Fox and Danny Grant), Roddy toured the album extensively around the UK, playing over 100 shows in 2011 and 2012. The Guardian described the record as “a moving and quietly joyous collection of pieces weaving together strands of folk, jazz and country.”

A regular at Paisley Arts Centre, Roddy’s show this week will feature songs from his latest album, Listen to Keep as well as songs from his earlier solo work and several Idlewild numbers.

Glasgow News? Daily Updates part of our network
More nursery time on the way for Renfrewshire 3 and 4 year olds