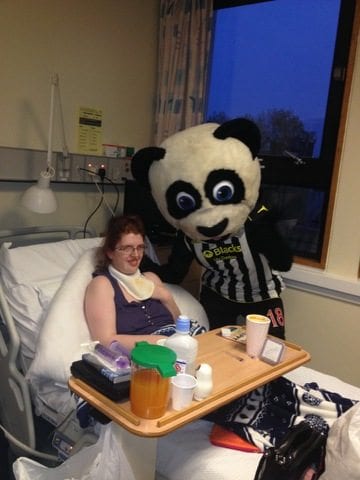 A Paisley girl got a shock when she received a hospital visitor that she was not expecting, as Paisley Panda dropped in to visit Kerry Robertson (19) at the Southern General’s ward 62 on Friday 25th October.

Kerry, a St Mirren fan and panda collector, was in complete shock when she turned to see the Giant Panda walking towards her. Her mum, Paisley.org.uk’s own Tracey Clements said “Kerry has been feeling quite down, she has been in the hospital for almost 9 weeks now and I was wondering what could cheer her up, so I spoke to Brian McGuire who contacted St Mirren and asked if the Panda could visit. They contacted me by email and we arranged it from there”

Kerry was admitted to the Southern General Hospital on the 26th August after visiting the Glasgow Dental Hospital, she had been having trouble with a “ulcer” on her tongue. Doctors prescribed mouthwashes and antibiotics but when nothing worked, her Mum contacted the Dental Hospital and pleaded with them for someone to see her. They saw her within a few hours, she needed an urgent referral to the Oral Health unit and it was from there she was sent straight to the Southern General.

Tracey said “Everything happened so quickly, we were at the Dental Hospital at 9am and at the Southern General by 11.00. Kerry was sent for scans, x-rays, photographs of her mouth, blood tests and then on to see the consultant. He told us he was going to perform a biopsy that afternoon.”

On Friday 30th August the family were dealt the devastating blow they were dreading most, Kerry had cancer. Plans were put in place to remove the tumour and on Thursday 19th Sept Kerry was wheeled into theatre for what turned out to be a 13 hour operation, where her whole tongue, lymph glands from the right side of her neck, part of her voice box and most of her teeth were removed. She now faces 6 weeks of chemo and radiotherapy.

Tracey says “Kerry has been so brave through all of this, I am incredibly proud of her. Sure she has had bad days but given what she is going through that can only be expected. She repeatedly tells us that she is going to kick cancer’s ass.”

Kerry, who was due to start a college course to train as a special needs teacher the same week she was admitted to hospital, said “Everyone has been great, a friend of my Mum took part in a Race for Life for me and raised £170 for Cancer Research, a local business set up a fundraising page for me so when my treatment is completed I could use the money to maybe have a wee holiday somewhere to recuperate and of course the staff at the hospital has been absolutely amazing.”

Tracey concluded by saying “I just want to thank St Mirren and Paisley Panda for going out of their way and beyond any normal duties by going all the way up to the Southern General to visit Kerry. Once the initial shock wore off she was thrilled and told everyone about her surprise visitor, and of course thank you to Brian for helping to arrange it.”

Brian McGuire founder of the Paisley.org.uk website said: “Tracey has been an integral part of the running of the Paisley website over the last couple of years, we know how much of a shock this was for Tracey, Kerry and the rest of the family. I speak for everyone at Paisley.org.uk, we are delighted we could do something that in some small way helped cheer Kerry up. It also shows that the community of Paisley can come together to help those in need. I wish to thank the Paisley Panda and St Mirren who did not hesitate and immediately offered their help..”

Glasgow News? Daily Updates part of our network
Sisters reunited thanks to Paisley on the Web