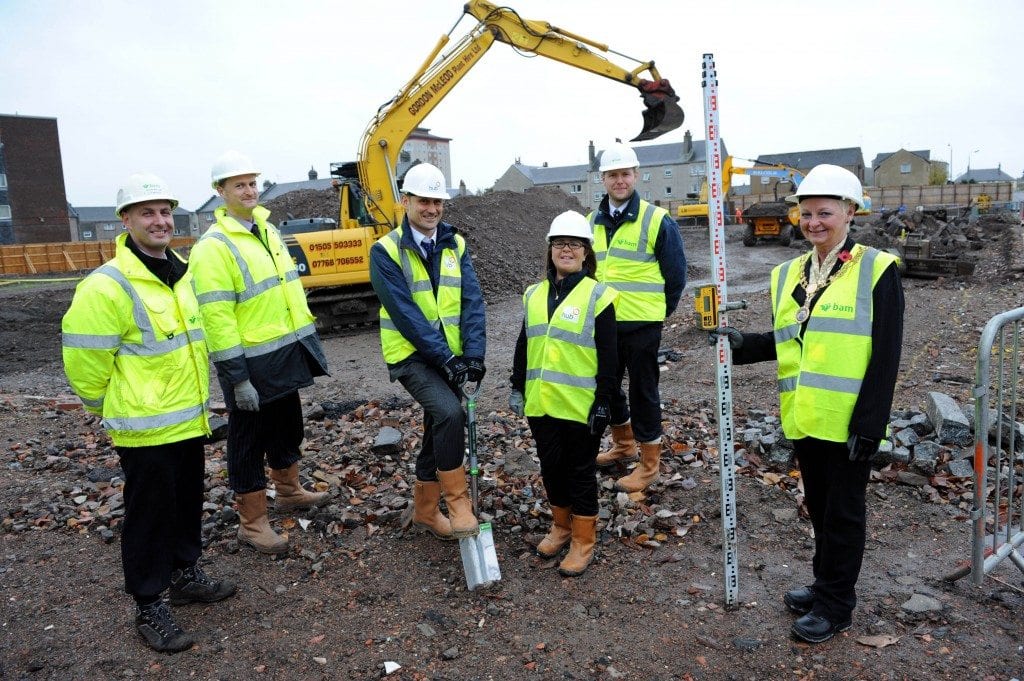 The new £14.5m Johnstone Town Hall has been hailed as a development which will benefit the whole town, as work starts on the new building.

Workers have been on site this week to start groundworks on the 21-month project to build and fit out the state-of-the-art town hall.

The building is being taken forward by Renfrewshire Council and represents a massive investment in the regeneration of Johnstone. When it opens in summer 2015, the town hall will house a new library, marriage suite, theatre and conference space, meeting rooms and a café.

It will also contain offices for Renfrewshire Council housing and social work staff, as well as Police Scotland and Macmillan Cancer Support.

And Provost Anne Hall – who attended a small ceremony to mark the start of building work – believes the development will be a major boost for Johnstone.

She said: “This will be more than just a building – it will be a modern centrepiece for the entire town.

“It will bring a number of important facilities and services under one roof – there will be something there of benefit to every resident of the town and its surrounding area.

“A lot of work has already gone into the design for this building over the past few years – and the council has been very keen to involve the community in that.

“The start of building work marks another significant milestone along the way.”

Provost Hall was joined on site by representatives of BAM Construction, the building contractors, and Hub West Scotland, who manage the contract.

Earlier this month, Renfrewshire Council unveiled hoardings around the site which display an illustration of buildings and landmarks around the town.

The epic artwork – which stretches around three sides of the site – is intended to represent and showcase the town’s past, present and future while work is ongoing.

A temporary Johnstone Library will be open in Collier Street while the work is ongoing.

For more information about the project, visit www.renfrewshire.gov.uk/johnstone or call 0300 300 0114.