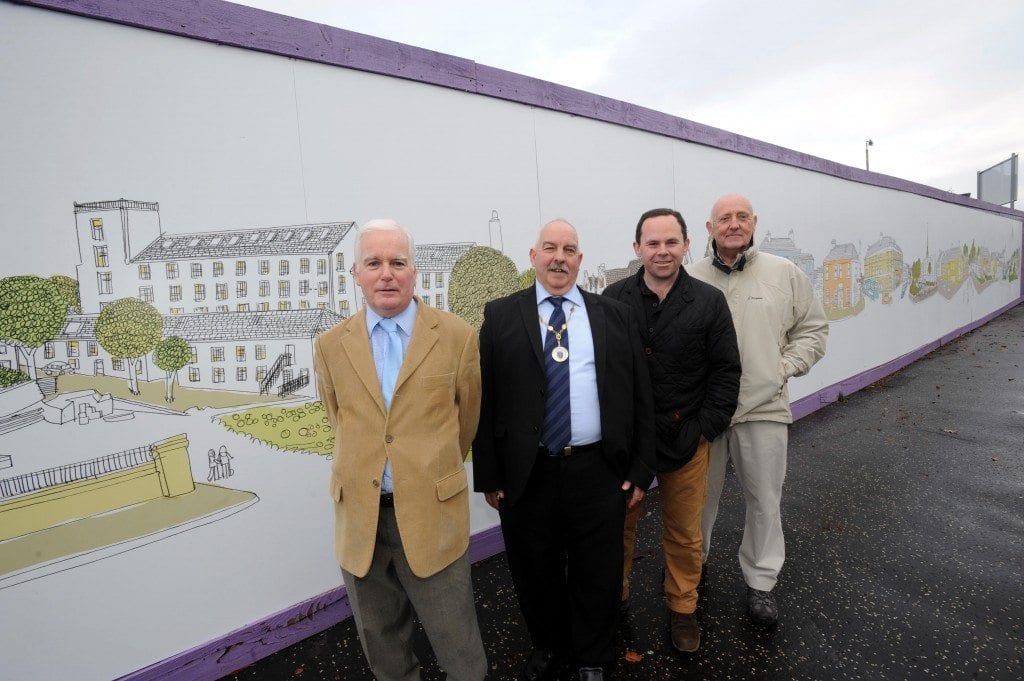 Johnstone’s newest building is being used to celebrate its existing ones – thanks to an ambitious piece of artwork devoted to the town.

Renfrewshire Council has just unveiled a specially-commissioned illustration of Johnstone landmarks to cover the hoardings around the site of its new town hall.

Construction on the £14.5m facility is due to start before the end of the month, with the building expected to be finished by summer 2015.

But council chiefs wanted to make sure the local community had a backdrop which represented the town while work was ongoing.

Glasgow-based artist Adrian McMurchie was brought on board to create an illustration of Johnstone’s buildings.

The resulting epic artwork will be displayed on three sides of the site hoardings, stretching from Ludovic Square, along William Street and into the adjacent car park.

A small section is already on display, with the rest to follow shortly. It features the town’s station and Paton’s Mill, as well as local churches, shops and housing.

Renfrewshire’s Deputy Provost John Caldwell met Adrian and representatives of the local community in Ludovic Square to see it for themselves.

Deputy Provost Caldwell said: “We wanted to make sure people weren’t just looking at a blank wall – that they had something unique and eye-catching instead.

“Adrian has done a great job with the drawings – and I’m sure people will enjoy wandering round them picking out the local sights.

“But while we are admiring the town’s existing architecture, one of the most exciting developments of all will be the one going up behind the hoardings.

“The new town hall represents a massive investment by the council which will transform the centre of Johnstone.

“We hope residents will identify sites of personal and community significance in this artwork and enjoy the sense of continuity between the past, present and future.”

Once complete, the new town hall building will house a new library, marriage suite, theatre and conference space, meeting rooms and a café.

The artwork around the town centre has been given the thumbs-up by local community activists.

Throughout the project, Renfrewshire Council has been keen to involve members of the Johnstone community in the plans for its design.

Over the next few months, there will be various community activities, including the chance to contribute to public art which will be displayed inside the new building.

“It depicts the town very well – there were a few bits I instantly recognised, such as the High Church, and the former health centre.

“We are pleased we are getting a new building – it should be a big improvement on the last one and we are looking forward to it.”

Community council chairman Dennis Lavery added: “I like the way it is laid out – it isn’t meant to be a map of the town but it depicts it well.”

Artist Adrian McMurchie explained how he was able to create the mammoth artwork. He said: “It was a great job to work on and it is great to see it going up.

“We initially discussed doing lots of photos but decided drawings would work better. I had a drive around and that gave me a lot of ideas.

“I had never worked on anything as long as this before – I ended up doing the drawing on a 10m piece of paper.

“Johnstone has some great architecture but we didn’t just want it to be about the old buildings, we wanted to include some of the housing too.”

GLASGOW AIRPORT PUTS £50,000 UP FOR GRABS
Scroll to top
Go to mobile version