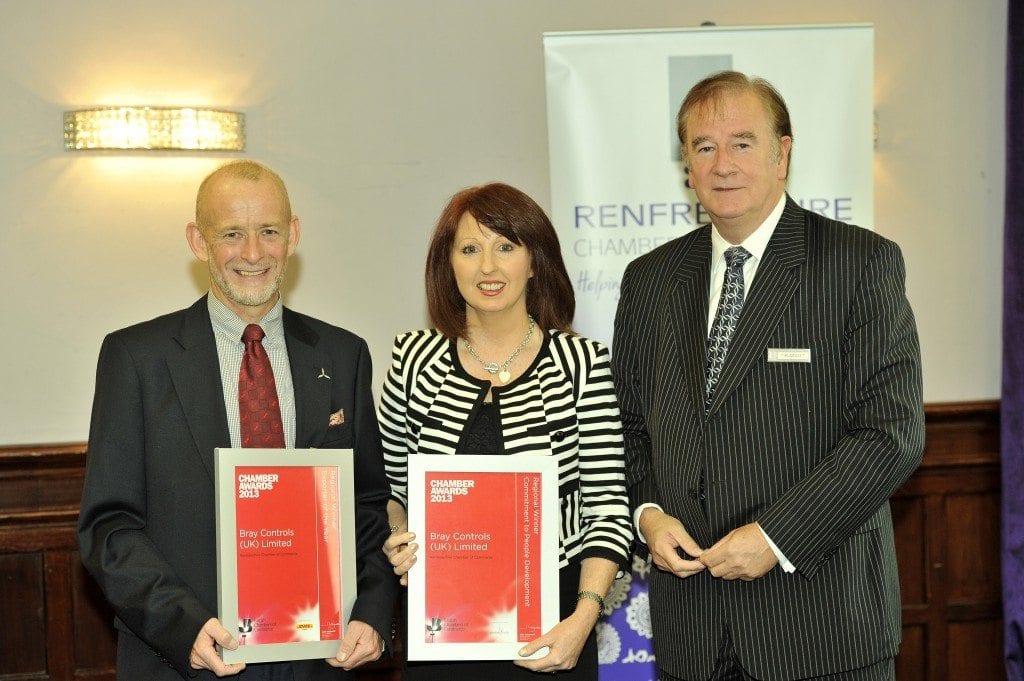 Renfrewshire Chamber member Bray Controls (UK) from Inchinnan, is celebrating after being crowned one of the winners in the Scottish heats of the Chamber Awards 2013. The British Chambers of Commerce (BCC) Chamber Awards, now in their 10th anniversary year, is one of the showpiece events in the business calendar, highlighting the role of business as a positive force for the UK recovery, and for local communities.

Bray won 2 awards for the Scottish Region: Exporter of the Year and Commitment to People Development.  Bray now go forward to represent Scotland in the national finals, which take place in London in November.

“I visit businesses up and down the country and am constantly impressed by their determination, innovation and the contributions they are making to their local communities. Many of them are optimistic and looking for opportunities to grow and find new markets for their products and services both at home and abroad. These are the kinds of businesses that will become the wealth creators of tomorrow, and will play a crucial role in helping the UK economy move from being good, to being great in the months and years ahead. The Chamber Awards, now in its tenth anniversary year, is the perfect platform to showcase the amazing work of UK firms across the country, and show the world why Business is Good for Britain.”

Bray attended the recent Renfrewshire Chamber lunch where they were awarded their certificates from Chamber President Tom Johnston who commented “Bray are a very supportive member of the Chamber who have given great opportunities to several young people via the Recruit and Invest in Renfrewshire. Congratulations to Bray on their double regional win and we look forward to attending the finals with them in London.”

Bray MD George Crooks said “it’s great recognition for Bray’s employees, many of whom have watched the business almost from Day 1. The awards reflect well on Bray, and also on the efforts and support of Renfrewshire Chamber.”

About Bray – Bray has earned a reputation for excellence by creating products of superior value and quality, providing personalised customer service and on-time deliveries. Their success has always been the direct result of their fully integrated range of butterfly valve and control products. Rugged and reliable, their products are engineered to provide years of trouble free service.

Information and photographs courtesy of Renfrewshire Chamber of Commerce.