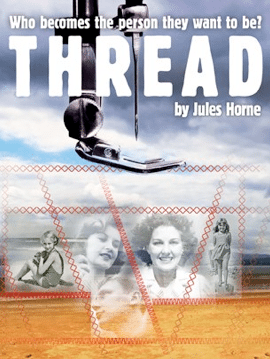 Award-winning Edinburgh theatre company Nutshell is touring Scotland with Thread by acclaimed Scots writer Jules Horne. This darkly funny play explores friendship, the choices we make and who we become when our memories start to fade.

Thread is the second play in Nutshell’s Still Points in a Turning World trilogy and will be touring this October as part of the Luminate Festival, Scotland’s creative ageing festival.

Come roll your dice at the Burntisland beetle drive and share Joan, William and Izzy’s tangled lives. Friends since primary school and closer-than-close ever since, identities stitched together as intricately as their homemade party clothes.

Living in the secure but suffocating embrace of a 1950s Scottish seaside community, who gets to become the person they want to be?

Two performances of Thread will take place at Renfrew Town Hall on Fri 18 Oct at 2pm and 7.30pm. Tickets to the show cost £10 (£6 conc) and can be booked at the Box Office on 0300 300 1210 or by visiting www.renfrewshire.gov.uk/onlinebooking

Thread is suitable for ages 8+

Glasgow News? Daily Updates part of our network
A celebration of Gaelic Heritage and Culture at Paisley Museum

No Credit? No Problem. No Escape. ‘The Collection’ comes to Paisley Arts...
Scroll to top
Go to mobile version