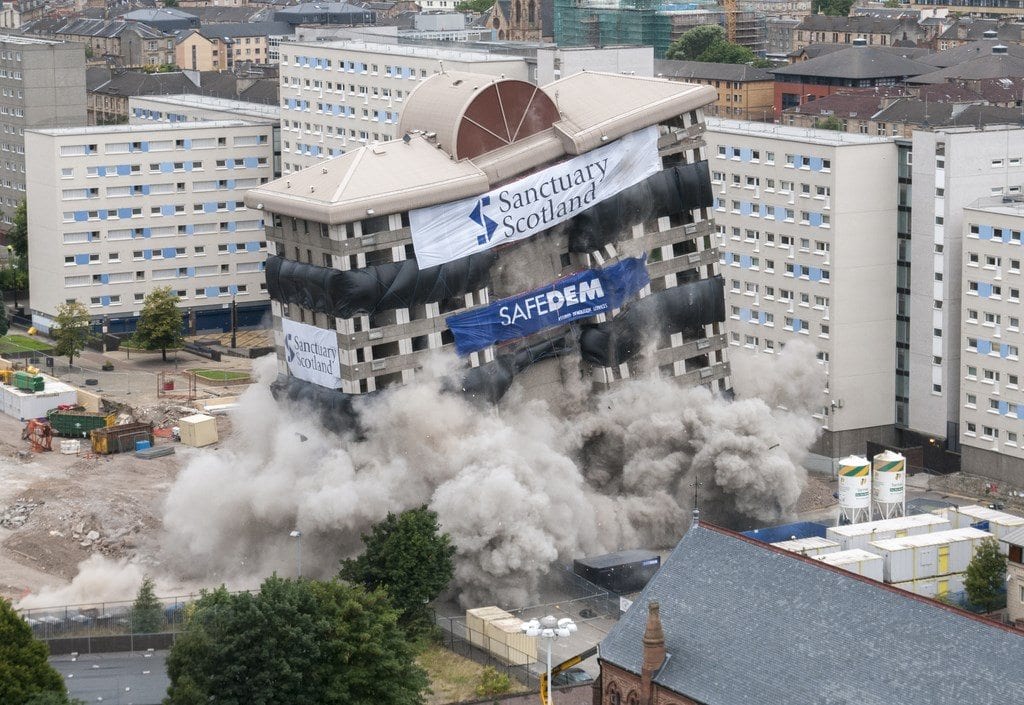 A TOWER block near one of Britain’s busiest roads has been demolished in a controlled explosion.

Traffic on the M8 motorway through Glasgow was briefly halted at 11.29am today (Sun), moments before the 18-storey building was brought down.

The Sanctuary Scotland Housing Association block at 14 Shaftesbury Street was once home to 128 families. The demolition allows the social housing provider to continue its £50 million regeneration of Anderston.

Peter Martin, Sanctuary’s Group director – development, said: “This is a significant milestone in a project which has revitalised a thriving community in the heart of Glasgow.

“The quality of our housing has not only changed the lives of Anderston residents for the better but also created many jobs and training opportunities. Conditions remain tough in construction but Sanctuary continues to support the sector through our extensive new-build programme.

“The demolition of 14 Shaftesbury Street is not an end but another new beginning for Anderston. It allows us to create better homes to house even more local families for many decades to come.”

To date, Sanctuary Scotland has built 176 new homes in Anderston and more than 2,000 affordable properties across Scotland as a whole. By 2015, another 158 homes will be built on the land where the 50 metre tall tower block fell. Thirty kilograms of explosive strategically placed over five blast floors demolished the 10,000 tonne structure. Residents in 320 neighbouring properties were evacuated as a safety precaution.

Area resident John Beattie had a top-floor flat in 14 Shaftesbury Street for 20 years. His home offered unhindered views of the Kingston Bridge and Glasgow city centre.

Since moving to a new, lower-level Sanctuary flat last November, John’s heating bill has more than halved and – unlike before – he is now able to get out and about.

John, 79, said: “It was a great building when I first moved in but it’s time to pull it down.

“It’s progress. These blocks were put up in the 1960s for one reason only – to build homes quickly and get people into them.

“I saw a few bombs drop during the war so I’m not fazed seeing the building brought down. I miss the view but nothing else, life is better now.”

All photographs are courtesy of David J Pollock