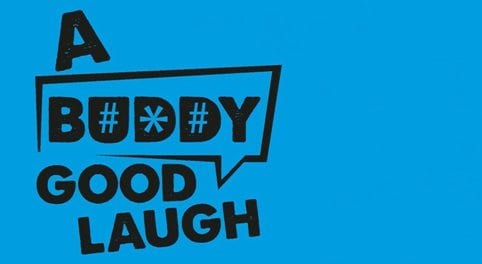 Have you heard the one about the mystery comedian?

Just two days to go until the launch of ‘A Buddy Good Laugh’ at Paisley Arts Centre.

With just days to go before the launch of Dead Sheep Comedy and Renfrewshire Arts & Museums’ brand new comedy strand, everyone is talking about who the mystery headliner could be.

Over the past few weeks Renfrewshire Arts & Museums have given away a few clues about who the mystery stand-up star could be, but so far their identity remains a closely-guarded secret.

But fans of comedy are sure to know this act well from their sell-out tours just this year in Norway and Sweden, their recent stand-up performance alongside John Bishop and their appearance on the Glasgow leg of Michael McIntyre’s Comedy Roadshow in 2010. The Edinburgh-based comic has also appeared on hit TV series Mock the Week and 8 out of 10 Cats.

The mystery headliner’s identity will be revealed at the inaugural ‘A Buddy Good Laugh’ gig this Thursday.

Growing speculation as to who the special guest star could be has seen a spike in ticket sales – audiences are advised to book now to avoid missing out on this fantastic line-up and a night of non-stop laughter.

Widely regarded as one of Scotland’s hottest comedy talents, Chris Forbes gained a legion of new fans when he supported Kevin Bridges on his 2012 tour The Story Continues…

Charismatic and confident, Chris’ conversational style never fails to engage his audience or deliver laughs loud enough to bring the house down.

Well known for his portrayal of Father Stone in the classic C4 comedy, Father Ted, Michael Redmond is lined up to deliver his own brand of deadpan humour. A regular performer on the Scottish comedy circuit, Michael is currently resident host of his own show Michael Redmond’s Sunday Service at The Stand Comedy Club in Glasgow.

A Buddy Good Laugh will be at Paisley Arts Centre on Thursday 26 September. Doors open 8.15pm and show starts 8.30pm. Tickets cost £10 (£8 conc) and can be booked by calling the Box Office on 0300 300 1210 or going online to www.renfrewshire.gov.uk/onlinebooking

Glasgow News? Daily Updates part of our network
No Credit? No Problem. No Escape. ‘The Collection’ comes to Paisley Arts...