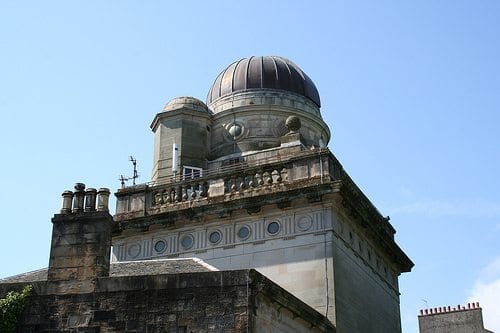 Tuesday 1 October will mark the 130th anniversary of the opening of Coats Observatory. To commemorate this event the observatory will play host to an evening of astronomical-themed events. The building now operates as a visitor attraction and museum. During the day visitors can enjoy a guided tour around the building, taking in some of the fantastic Victorian-era scientific equipment once used to record earthquakes, the weather and observe the stars and take in the view from the balcony. In the winter months the observatory opens twice a week to keep up the tradition of allowing members of the public to look at the night sky through the telescope. If the weather is poor a state of the art digital planetarium provides a virtual tour of the cosmos without having to leave the comfort of your seat.

To celebrate its 130th anniversary Coats Observatory will open from 7pm to 10pm on Tuesday 1 October. Amongst the activities on offer will be planetarium films, guided tours, a talk on the history of the institution and, weather permitting, night sky viewing from 9pm – 10pm. If the weather prevents the use of the telescope planetarium shows will operate instead.

Admission to Coats Observatory is free, although places must be booked for the planetarium films as spaces are limited. Please call Paisley Museum on 0300 300 1210 to book. Films will operate at 7.30pm, 8pm and 8.30pm.

Entry to Coats Observatory that evening will be via 49 Oakshaw Street West, Paisley, PA1 2DR.

For any other information on the event, please contact Coats Observatory on 0141 618 5119.

Glasgow News? Daily Updates part of our network
Renfrewshire Businesses get chance to quiz the experts