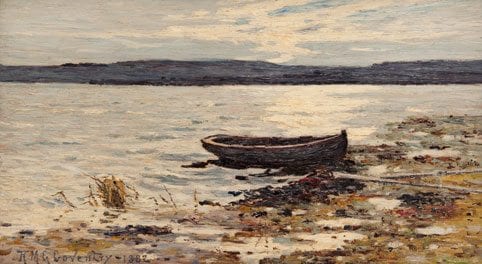 A celebration of Gaelic Heritage and Culture at Paisley Museum

To coincide with the Royal National Mòd, Paisley Museum presents three exhibitions, collectively titled ‘A Celebration of Gaeldom’ running from 27 September to 27 October.

The exhibition, ‘A Wing and A Prayer: Paisley’s Gaelic Chapel Graveyard’ will reveal how research into a secluded former graveyard has illuminated the rich cultural heritage of Gaelic speaking people who migrated to Paisley in the late 18th and early 19th centuries. Their lives were hard but Gaelic speakers performed a huge diversity of crafts and trades. Nowadays the site shows a diversity of a different kind – of wild plants and animals – providing a small wildlife refuge in the heart of Paisley.

‘A View of Gaeldom’ is an art exhibition, featuring works from the Paisley Museum collection that depict the beautiful scenery of those parts of Scotland in which Gaelic was traditionally spoken. Indeed Gaelic place names are in evidence in many of the titles. In addition some excellent examples of Celtic Revival Art will be displayed.

The final exhibition, ‘Weaving and Waulking’ will look at the traditional methods and skills of producing cloth in Scotland. ‘Waulking’ is a method of shrinking or ‘fulling’ newly woven tweed and is carried out by a group of women who sing in unison as they work the cloth on the table. During the week of the Royal National Mòd there will be opportunities to see a traditional hand loom in operation and demonstrations by waulking groups.

Councillor Jim Harte, Convener of Sport, Leisure and Cultural Policy Board at Renfrewshire Council states ‘ As we celebrate Paisley hosting the Royal National Mòd this year, these exhibitions are a wonderful opportunity to showcase the links Renfrewshire has with Gaelic heritage and culture.’