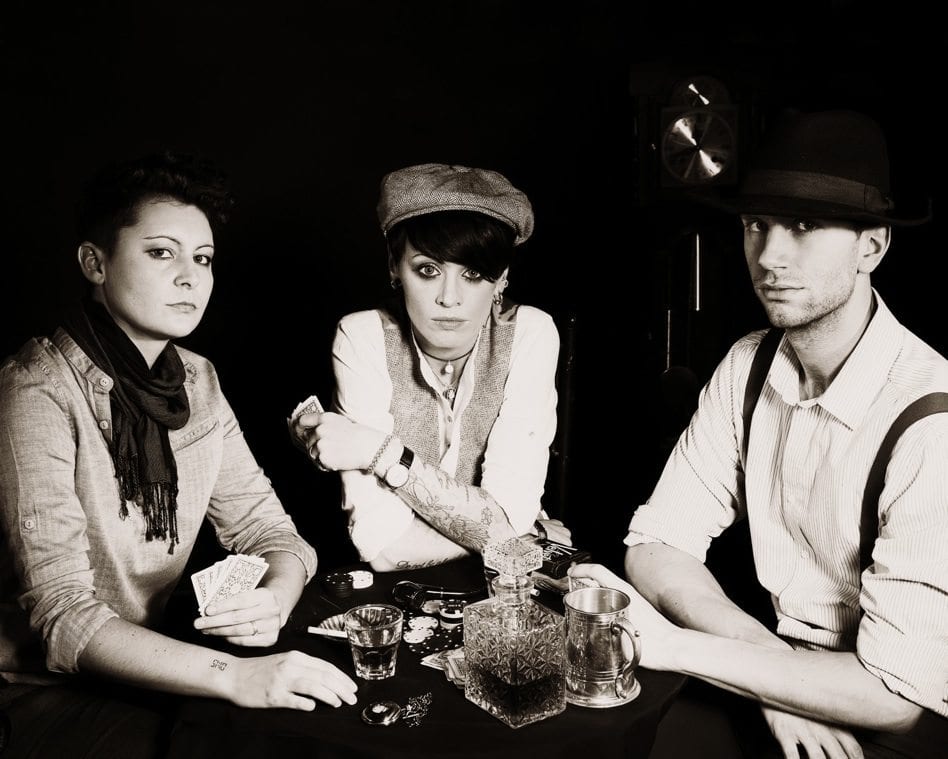 While waiting for the Chaplins to come out on stage, among the buzz floating through the audience, more than a few times I heard talk in the vein of “what instrument does Charlie play”?

The link between the band and the man isn’t actually very far removed. The Chaplins formed as a three piece in 2012 with singer-songwriter Jill Jackson, drummer Lisa Tring and double bass player John Allan and named themselves after local Paisley lady Jill’s love of film star Charlie, going to far as to outfit the band in 20’s period fashion and styling. Since then they’ve played all over Europe and the UK and supported Runrig at their sold out tour.

This is their first night in Paisley as the Chaplins, what Jill describes as the home town show. “I’ve got family and friends coming to the gig, this’ll be my way of introducing them to all the new music and the band.” Does Jill feel extra pressure then? “A bit, aye, but we’ll feel like that when we play Lisa’s hometown of Nottingham too.”

The venue helped create an intimate atmosphere, with almost every seat in the house filled. There’s clearly a lot of local support for the band, with audience members of all ages coming to see the show, including Jill’s friends and family who were in the audience.

Their musical style is described as an “alternative bluegrass style” and their influences range from Alison Krauss to Dolly Parton which shine through, while still presenting the band in their own completely unique sound. The Chaplins have created their own take on not just bluegrass but country and Celtic and have written songs that match well with the talented musicians who bring them to life.

The real joy of seeing the Chaplins, though, was how much they were clearly enjoying themselves. Every song was lovingly performed by the band, and as an audience member you can’t help but find yourself under their control; a huge smile on your face during Saving All My Love, feeling thoughtful and like you want to explore the world with The Rambler or even just rocking with their take of Foreigner’s 80’s power ballad I Want To Know What Love Is.

The band effortlessly creates an atmosphere you want to be a part of which due to the size of the venue, you soon got the opportunity. At one part the band wanted audience participation for one song which involved Lisa leading the audience in a rather complicated rhythm of clap-stomp-clap-stomp-pause-pause-clap-clap-clap. Or was it clap-stomp-stomp clap- clap-stomp-clap-pause-clap-clap?

Their enthusiasm for their music and for performing really drags you in, whether you want to or not. It’s hard to believe they’ve only been around for a year. The Chaplins go on a larger tour in support of their album towards the end of this year.

You can find out a lot more about the Chaplins by visiting their website www.thechaplinsofficial.co.uk

Many thanks to the band, their management team and Mike Dillon of Apollo Music for their help.