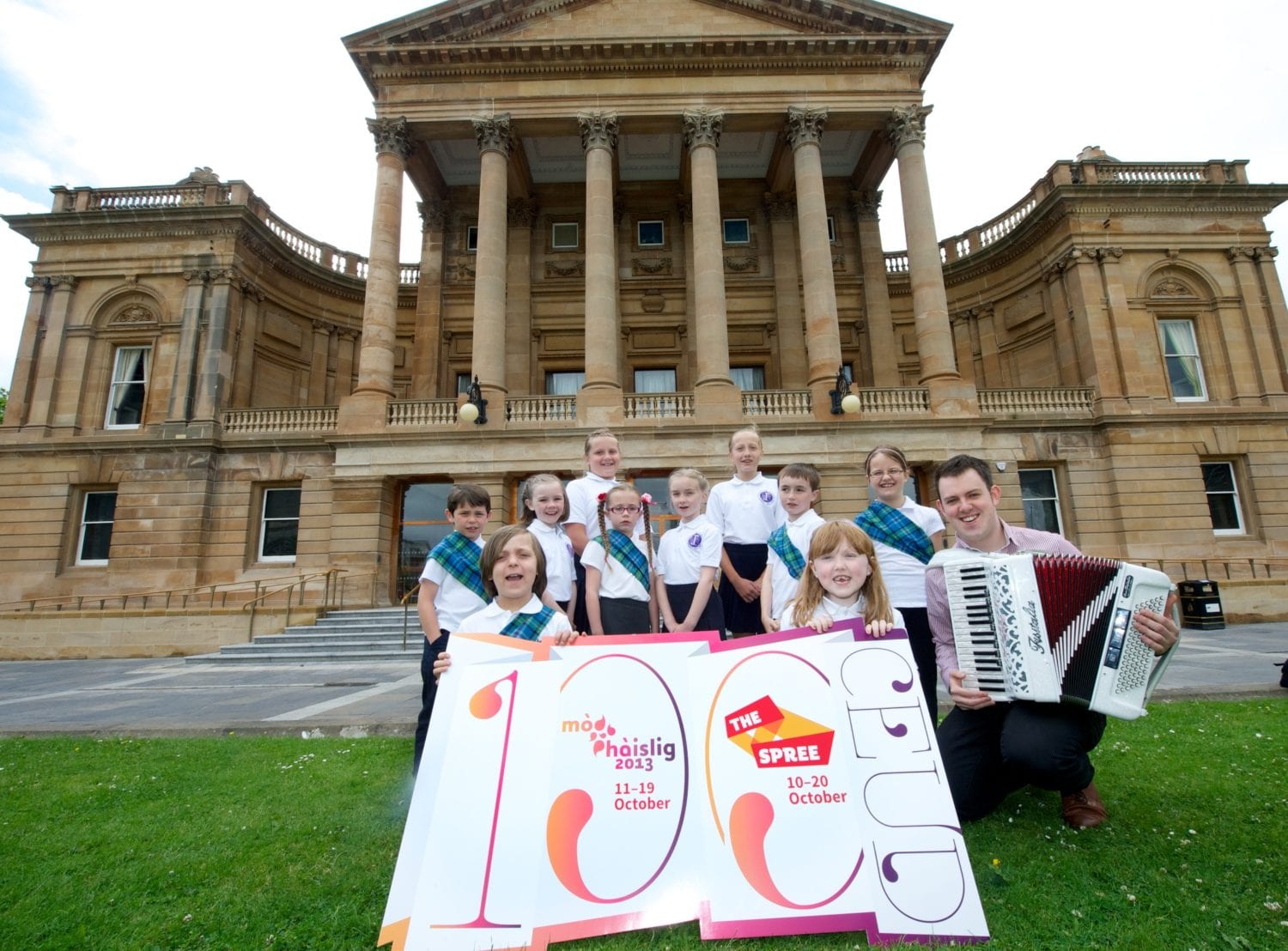 Countdown is on until Mòd and Spree

The countdown is on until Paisley becomes the centre of Scottish cultural activity with less than 100 days to go until it hosts the Royal National Mòd and national music and arts festival The Spree.

Wednesday 3 July marked the start of the 100-day countdown until the Mòd (11 to 19 October), Scotland’s premier celebration of Gaelic language and culture, which is taking place in the town for the first time.

And it will be joined by The Spree (10 to 20 October), which has been designed to wrap around the Mòd and is set to feature some of Scotland’s top music and comedy acts.

The Spree made its debut in 2012 and has been expanded to 11 days this year, building on the success of last year’s event.

Renfrewshire Council is backing and helping to organise both festivals as part of its strategy to promote the area as an events destination, and is looking to involve residents, businesses and visitors.

Renfrewshire Council Leader Mark Macmillan said: “We are delighted to welcome these two festivals to the area, and expect them to further Paisley’s reputation as a Scottish entertainment destination.

“The Mòd and Spree festivals will see thousands of visitors arrive in Renfrewshire, bringing considerable economic benefits to the area.

“Paisley has some stunning and distinctive venues which will add to the flavour of these events – including Paisley Abbey, which celebrates its 850th birthday this year, and Paisley Town Hall, fresh from a £2.4m revamp.

“When October comes around, the town will be buzzing with activity, and it will be the perfect opportunity to showcase everything the area has to offer.”

Ealasaid MacDonald, Convenor of the Mòd Phàislig 2013 Organising Committee, added: “With 100 days to go we are working very hard to ensure the visit of the Royal National Mòd to Paisley will very memorable.

“We know it is an honour to host the Mòd and we are grateful to An Comunn Gàidhealach for bringing this historic and culturally-significant festival to our town.

“The town is looking forward to a great Gaelic experience and is very excited about welcoming everyone to Paisley in October.”

Full line-ups will be revealed soon, with tickets going on sale viawww.thespree.co.uk on 15 July. More info on the Mòd can be found at www.modphaislig.org

With great transport links, easy access and lots to see and do in Paisley, the town is gearing up for a very busy October.

John MacLeod, president of An Comunn Gàidhealach, said: “We are really looking forward to the first visit of the Royal National Mòd to Paisley.

“An Comunn Gàidhealach have been working very closely with the Local Organising Committee to ensure that Paisley is the heart of Gaelic culture this October.”

Paul Bush OBE, chief operating officer for EventScotland said: “Scotland is the perfect stage for events and with just 100 days until The Spree and The Royal National Mòd get underway in Paisley anticipation is building for what will be a fantastic 10 days of entertainment and celebration of Gaelic culture.

“We are delighted to be supporting The Spree again this year, following the success of 2012, which laid strong foundations for a strong cultural legacy from hosting the Mòd.”

“Congratulations to An Comunn Gàidhealach and Renfrewshire Council on their great work to date in preparation for the Royal National Mòd and the complimentary festival, The Spree, both of which we’re really looking forward to.”

Recruits get the message with branding task
Scroll to top