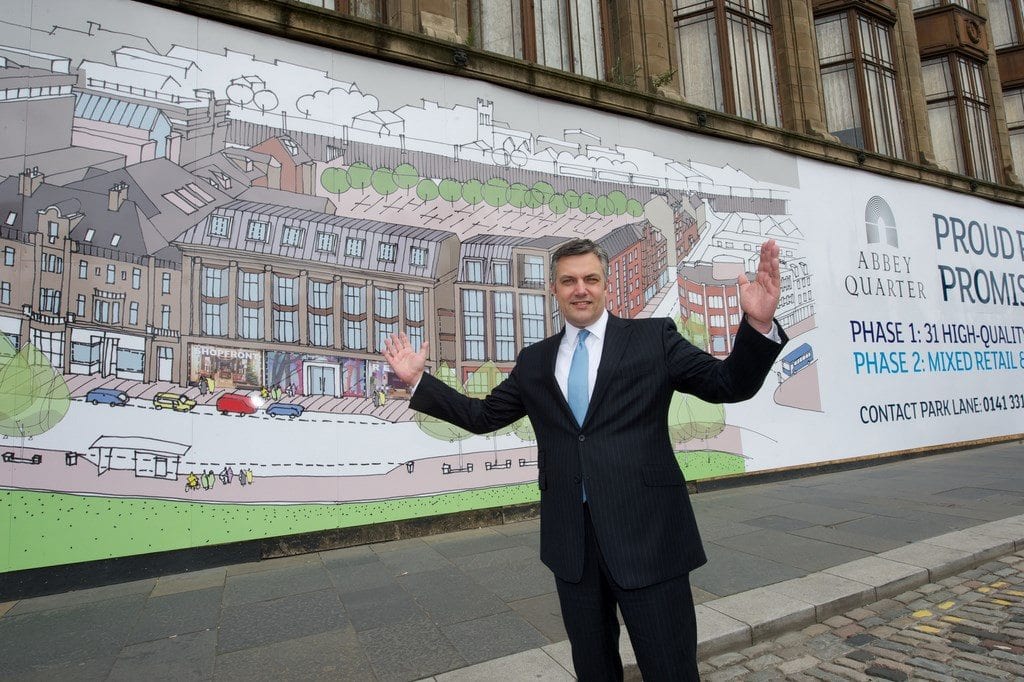 Vision of the future as Arnotts images revealed

Paisley residents have been given a vision of the town’s future as artist’s impressions of proposed development on the Arnotts site were publicly unveiled.

Renfrewshire Council Leader Mark Macmillan revealed new hoardings on the frontage of the former department store showing how the development will look.

The council has brought together a plan involving public and private sector partners for 31 new-build flats on Lawn Street. Plans are also well advanced for a second phase of development which will transform the iconic listed building on Gauze Street into nine luxury apartments plus retail units.

And Councillor Macmillan believes the development could kickstart a series of wider benefits for the town.

He said: “I am delighted to be able to unveil these images, which will give residents a look at how this important development will shape up.

“Bringing more people into the town centre to live can only be a good thing for the town centre, as the spending power of the new residents will boost local traders.

“When added to the development across the road at The Cloisters, and the recent investment in new student housing by UWS, we can see real progress in this area. “Of course, the Arnotts development is only one of several projects which are boosting the appeal of the town centre.

“These include the work to preserve Paisley’s outstanding architectural heritage through the Townscape Heritage Initiative, and the £2.4m revamp of the town hall.

“Strathclyde Partnership for Transport has also confirmed it will be making a £1.8m investment in improved bus infrastructure in the town centre.

“We are also hoping to inject new life into the town’s night-time economy by taking forward plans to allow traffic to return to the High Street in the evenings.

“Added to this, October will see the town firmly in the national spotlight when we welcome thousands of visitors for Royal National Mod and The Spree festivals.

“The Arnotts development is proof that Paisley remains an attractive place for firms to invest, and we hope it will be a catalyst for even more development in the future.”

Construction of the new flats will be carried out for Link Group by Westpoint Homes, who have already completed the flats at The Cloisters on Cotton Street.

Construction on the first phase of the Arnotts development is expected to start next year and be completed by spring 2015.

Glasgow News? Daily Updates part of our network
School’s out for sports graduates