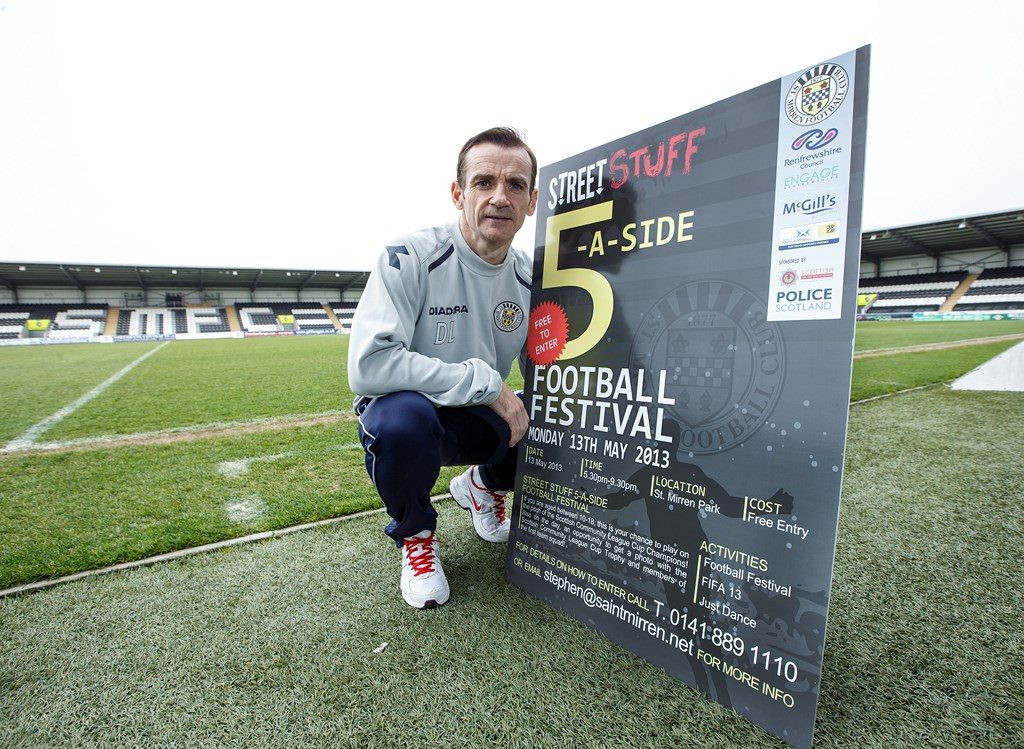 Young people from throughout Renfrewshire can step out on the hallowed turf of St Mirren Park to show their football skills at a special tournament this month.

The festival of five-a-side football is an annual end-of-season event run by the area’s award-winning Street Stuff youth diversionary project.

Street Stuff is a partnership between various local agencies, including Renfrewshire Council and St Mirren, offering activities for young people – such as mobile youth clubs and street football with coaching from the club – at youth disorder hotspots.

And the scheme’s organisers are looking for teams of young people aged from 10 to 18 to get their entries in for the event, on Monday 13 May from 6.30 to 9pm.

Those playing on the day will be able to pose with the Scottish League Cup, and meet some of the first-team players who won the trophy in March.

Youngsters will also get to try out St Mirren’s brand-new Dome, with some of the action due to take place in the recently-opened indoor pitch beside the stadium.

For those who don’t fancy the football, computer games will be set up in the main-stand hospitality suite, with Fifa 13 and Just Dance on offer.

Councillor Eddie Devine, Renfrewshire Council’s Street Stuff champion, said: “The activities run by Street Stuff have made a huge difference to the area and to the young people involved.

“By giving youngsters somewhere to go and something to do, and through the work with police and the council’s community safety services, youth disorder rates have fallen in every area where the scheme operates.

“The end-of-season football festival is always one of the highlights of the Street Stuff calendar. I would encourage any local youngsters who want to play at St Mirren Park to get together with their mates and enter their team now.”

St Mirren manager Danny Lennon added: “The club is always keen to play a part in the local community and events like this are great for the youngsters.

“I’m sure we will see a great standard of football on the evening and who knows, maybe some St Mirren stars of the future will be among those taking part?”

There will be separate competitions for those aged 10-12, 13-15, and 16-18, with trophies for the winners. All those taking part will receive a goodie bag and medal.

Entry forms are available to download at www.saintmirren.net. More information is available by contacting Street Stuff organiser Stevie Gallagher on 07557 281581 or stephen@saintmirren.net

The event is being funded by Police Scotland and the Scottish Fire and Rescue Service.