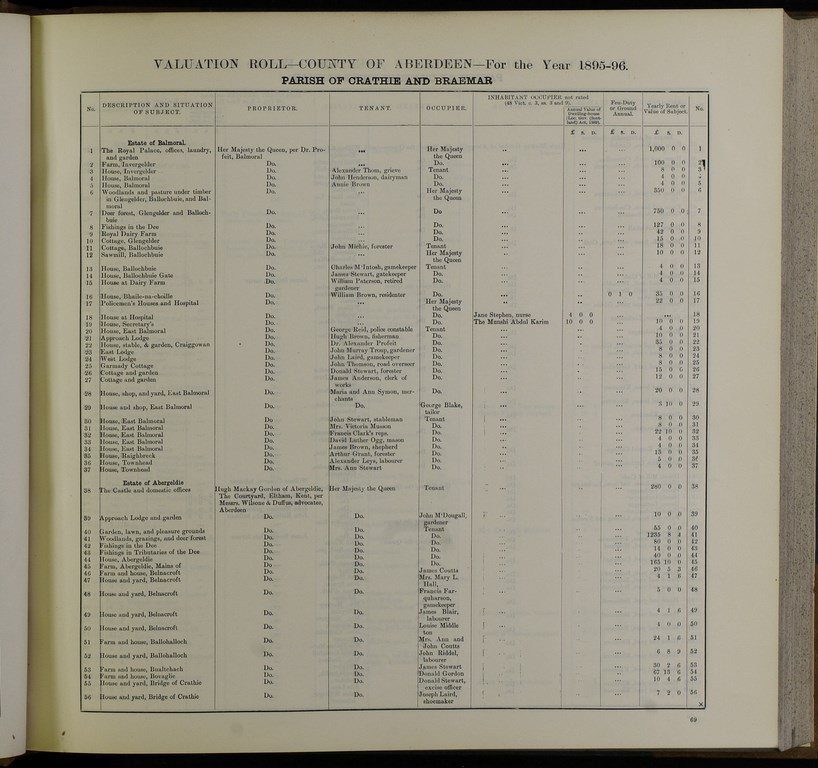 The names of more than two million Scots from the late Victorian age will be published today, as records of Scottish properties and their owners and occupiers in 1895 are released on ScotlandsPeople, the government’s family history website.

Called the Valuation Rolls, the records give an insight into Scottish society during that period, and will be a major resource for genealogists.

The records comprise more than two million indexed names and over 75,000 digital images, covering every kind of building, structure or property in Scotland that was assessed as having a rateable value.

The Valuation Rolls include people from right across the social spectrum, from the wealthiest proprietors to the humblest property owners and tenants of Scotland’s urban housing.

Some fascinating aspects of social history in Scotland during the late Victorian age are revealed in the Rolls, including the growth of tea rooms, the opening of Scotland’s first crematorium and the provision of housing for workers, such as shale miners and prison staff.

Researchers at the National Records of Scotland have also identified many ‘tee-names’ in the Rolls, the names used in some communities in the north-east and elsewhere to distinguish people of the same name.

Every one of the Valuation Rolls on the website is fully searchable by name and address, with the records listing the names of owners, tenants and occupiers of each property – in many cases occupations are also included.

“ScotlandsPeople is an incredible resource that enables Scots, those of Scottish descent and anyone with an interest in Scotland to find out more about our nation’s fascinating history, heritage, people and built environment. The release of the Valuation Rolls for 1895 is a welcome development that will strengthen the rich resource available in Scotland’s national archive.”

Tim Ellis, Registrar General and Keeper of the Records of Scotland, said:

“The release of the Valuation Rolls for 1895 will prove invaluable for family and local history research, enabling people to discover much more about who their ancestors were and how they lived. Reading an entry for a single building can provide a fascinating insight into local life at the time – adding to the information people can obtain from census records taken around that period. This forms part of the National Records of Scotland’s commitment to improving our service to the public and providing researchers with the resources that they need.”

Chris van der Kuyl, the CEO of brightsolid, the company that runs the ScotlandsPeople website on behalf of the National Records of Scotland, said:

“We’re very pleased to add a third set of Valuation Rolls indexes and images to the ScotlandsPeople website, bringing our total number of index entries to a remarkable 92 million. As part of an on-going digitisation project, the Valuation Rolls are an excellent historical resource and will help to bridge the gap between the 1891 and 1901 censuses.”