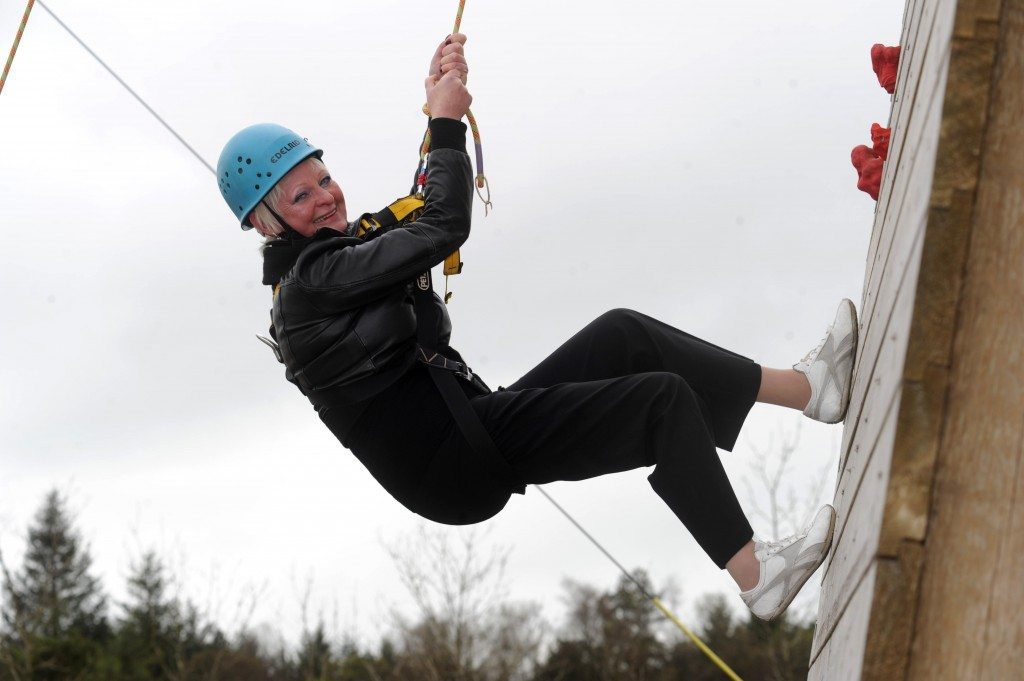 Renfrewshire’s Provost Anne Hall has been getting in some last-minute practice before leading a charity abseil with a difference.

Provost Hall will join Renfrewshire Council chief executive David Martin and  will be part of a group of 20 people who will abseil from the roof of the council’s HQ in Cotton Street, Paisley, at noon on Saturday. (May 25) And joining in the event, representing charities and council departments, will be Superman, Supergirl, Batman and the Black Widow from the Avengers who will all abseil in costume.

In keeping with the Provost’s aim of involving the community in the new project, a range of entertainment has been arranged for the watching crowd on the day.

Starting at 11am, the upper deck of the council HQ car park will host a bouncy slide, an inflatable beat the goalie and a range of charity stalls.

In advance of the big day, Provost Hall visited Lapwing Lodge Outdoor Centre in Paisley for a spot of abseiling practice.

There she met up with representatives of Civil Defence Scotland (CDS), a registered charity which provides a volunteer national emergency response team to assist in emergencies such as flooding and extreme winter weather.

CDS also help other organisations and charities run fund-raising events and have offered their knowledge of organising abseils to Provost Hall for the occasion.

“I’d like to thank CDS for the time and commitment they have given to our event,” said Provost Hall.

“And while I am looking forward to my first abseil it did no harm to get in a spot of practice!

“I’ve been very encouraged by the positive response to my aim of using the office of Provost of Renfrewshire to highlight and support the work of four outstanding local charities.

“I’d urge people to sponsor friends, family or colleagues who are taking part.  Or they can support the charities by simply donating direct to the collective charity fund online or in bank branches using Account Number: 20041937
Sort code: 82-54-04.  Further information on the scheme is available at www.renfrewshire.gov.uk/provostcharities

“I also hope as many people as possible come along to enjoy the event and join in the activities that have been laid on.

“People can  take advantage of the free parking in Renfrewshire Council marked bays in Paisley town centre every weekend.”

Glasgow News? Daily Updates part of our network
One week left for 10k and fun run discount. Don’t miss out!

Renfrew gearing up for Gala Day 2013.
Scroll to top