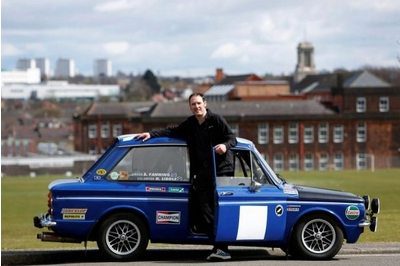 THEY were hailed as Scotland’s answer to the Mini, but quickly turned into a national laughing stock – famed for breaking down and seizing up.

But this week, champions of the Hillman Imp – manufactured during the 1960s and 1970s at the Rootes Group car plant in Linwood, Renfrewshire – will celebrate the 50th anniversary of a car that some believe was ahead of its time.

About 20 former workers will join Renfrewshire’s provost Anne Hall on Thursday as she unveils a commemorative plaque at the St James Business Centre in Paisley – formerly the offices of the Linwood car plant – to mark the factory’s opening by the Duke of Edinburgh on May 2, 1963.

Meanwhile, a convoy of 50 classic cars manufactured at the plant, including the Hillman Imp, will set off from Paisley to Coventry – once the headquarters of the Rootes Group. Organisers have appealed to any owners of a Hillman Hunter to get in touch to help complete the rally.

The event will be a chance for enthusiasts to honour a forgotten icon of Scottish motoring, scrapped in 1976 and followed in 1981 by the shutdown of the Linwood plant, which at its peak employed 9000 workers.

The Hillman Imp was born out of a post-war car boom. The Conservative government of the day introduced a scheme banning new car plants in areas which already had them. At the same time, grants were offered to companies willing to set up shop or relocate to deprived areas.

Linwood – with its high unemployment, proximity to Glasgow, motorways, air and rail links – seemed the ideal site. The plant would go on to manufacture 440,000 Imps. Unfortunately, the move proved disastrous for Rootes. The commercial failure of the Imp, first produced in 1963, ushered in a gradual takeover of the company by America’s Chrysler corporation. read more on the Herald Scotland website here…