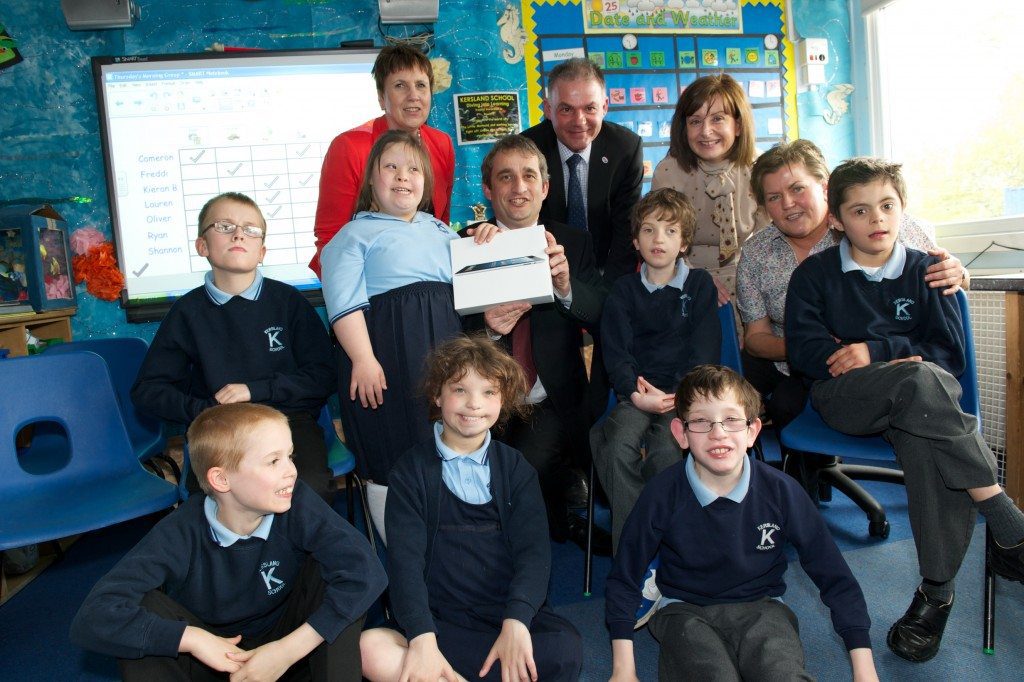 Pupils at a Paisley school have been given a technology boost – after they were gifted an iPad.

Kersland School – which caters for pupils with a range of additional support needs – already uses touchscreen technology to help the children communicate.

When bosses at IT consultancy Sopra Group – Renfrewshire Council’s technical partners – became aware of how the technology was helping the pupils, they kindly offered to donate an iPad to the school.

The award was made as part of the company’s commitment to rewarding innovative use of technology in the public sector.

John Bailey, Sopra Group’s Head of Local Authorities and Health, visited the school to see for himself how the gift would help the children.

Councillor Henry said: “I was delighted to visit the school to see for myself how new technology is making it easier for the pupils to develop their social and communications skills.

“We would like to express our thanks to Sopra Group for their very kind gesture in donating the iPad.”

John Bailey said: “We believe people who take forward innovation should be rewarded and wanted to do so within Renfrewshire in a way related to the work of Sopra Group.

“We were moved by the story of how technology has helped the pupils at Kersland. It is fantastic to see how technology can make a difference to people.”

At Kersland, the pupils have been using iPads and smartboard technology to communicate their needs, to say how they are feeling, and even to order lunch.

“It’s been really positive for the children and staff, they have really taken to it, and we are delighted.

“The pupils use various pieces of technology which allow them to communicate much more independently and are really easy to use.

“All the children get something out of it and it’s been life-changing for some of them. It’s been a great opportunity.”

Renfrew gearing up for Gala Day 2013.