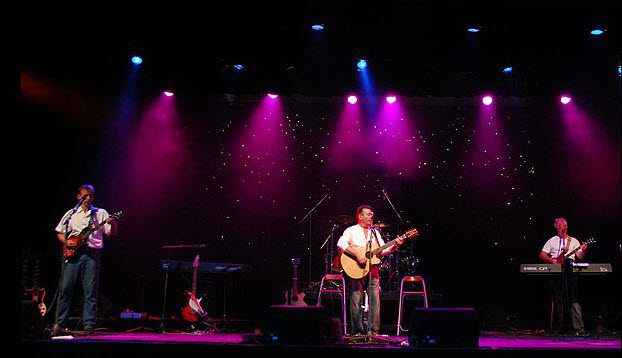 Eagles’ devotees and rock fans take note; original Eagles tribute group Hotel California will relive all the classics for one night only at Paisley Town Hall.

Coming to the venue on Saturday 11 May, Scottish group Hotel California have promised music fans a show stopping 100 minute live set, covering all the classics like Tequila Sunrise, Desperado and Peaceful Easy Feeling, not to mention their namesake track, Hotel California.

Formed in 1999, Hotel California started out humbly by playing pubs and clubs in and around their native Edinburgh. After several years honing their craft, the group then took their 2003 smash hit show ‘The Eagles Story’ on tour to large venues throughout Scotland, gradually building up a faithful following along the way. Acclaim for The Eagles Story really picked up speed though when word spread throughout the industry and reached The Eagles themselves – leading to the gig of a lifetime accompanying original member Don Felder at the prestigious Dunhill Cup in St Andrews. Since then, the band have continued to go from strength to strength not just at home, but abroad too, going as far as Australia to play at the Melbourne Music Festival. Catch the band next month with their brand new show, Hotel California – A Night of Eagles Music, taking place at Paisley Town Hall on Saturday 11 May, 7.30pm. Tickets cost £15 each (£13 concession) and can be bought by calling the Box Office on 0300 300 1210 or going online to www.renfrewshire.gov.uk/onlinebooking..