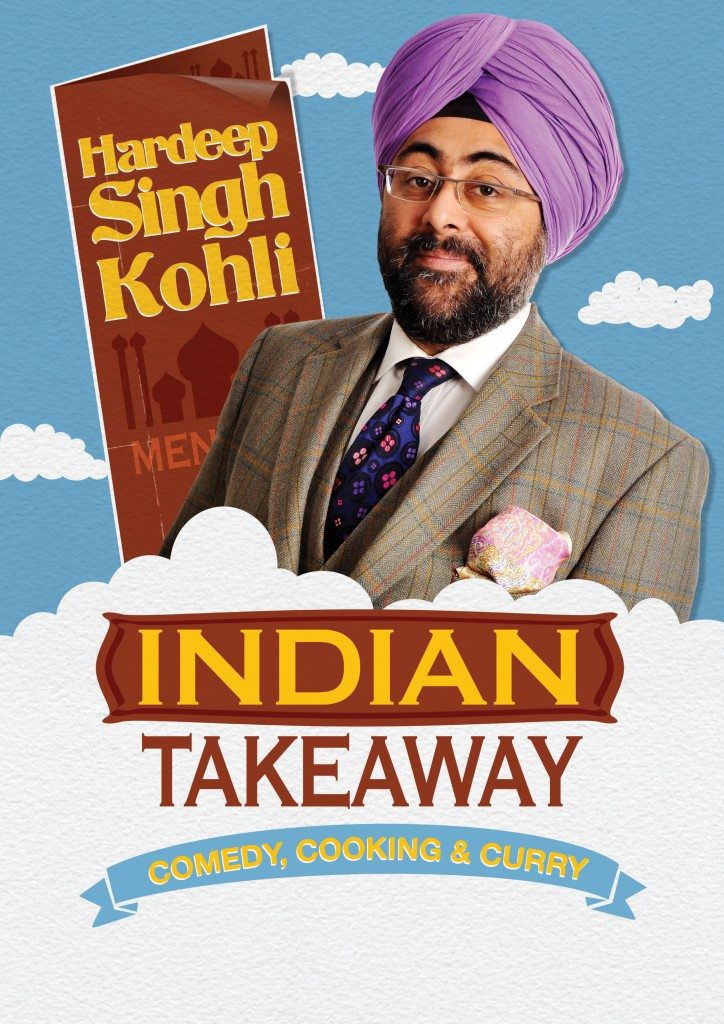 Following the success of his other live shows, Nearly Naked Chef and Chat Masala, Hardeep Singh Kohli would like to invite you to his brand new show, Indian Takeaway.

The country is obsessed with curry. That much we know. But how do Hardeep’s home-cooked curries – the recipes inspired by his Mum and his Gran – compare to the local Indian Takeaways we love and adore? Let’s find out!

At the beginning of each show Hardeep will order a takeaway live on stage for delivery to thetheatre, having selected a local Indian takeaway from audience suggestions submitted via HardeepLive.com. He will then order an audience member’s favourite meal. Whilst waiting for the order to arrive Hardeep cooks his own food.

Two curries with side orders of delicious cooking tips and lip-smacking Comedy. What’s not to like? “The ever-affable Glaswegian makes an excellent host and is well worth a taste.”

Hardeep’s love of all things culinary has led to him touring theUK constantly for the last three years with his hit shows The Nearly Naked Chef and Chat Masala which have both been huge hits with audiences across the UK. He was also runner-up on the first series of Celebrity Masterchef which led to two series for UKTV Food, New British Kitchen and Chefs and the City.

His first book Indian Takeaway was nominated for an Independent Book Award and he has written about food for Olive, Observer Food Monthly, The Spectator, The Times, The Sunday Times and various other publications and is a columnist for Waitrose Food Illustrated.

Hardeep is a regular host on Channel 5’s hugely popular current affairs show, The Wright Stuff and has been a regular reporter on BBC1’s The One Show and a guest on BBC 1’s Question Time, and This Week with Andrew Neil. For Channel 4 he has written and presented the BAFTA Award winning In Search of the Tartan Turban, the critically acclaimed and award winning Hardeep Does… and the seminal gambling series 50 Says You’ll Watch This.

As a journalist, his column in Scotland on Sunday called “hardeep is your love” saw him twice nominated in 2007 and 2008 for Scottish Columnist of the Year at the Scottish Press Awards. He is also Contributing Editor on the Spectator Magazine, has written for the Independent on Sunday, The Times, Observer Woman, Conde Nast Traveller to name but a few.

Having started his broadcasting career in radio he still holds the wireless very dear, presenting extensively across Radio 4 and Radio 5 Live and has made a plethora of documentaries for Radios 2, 3 and 4.