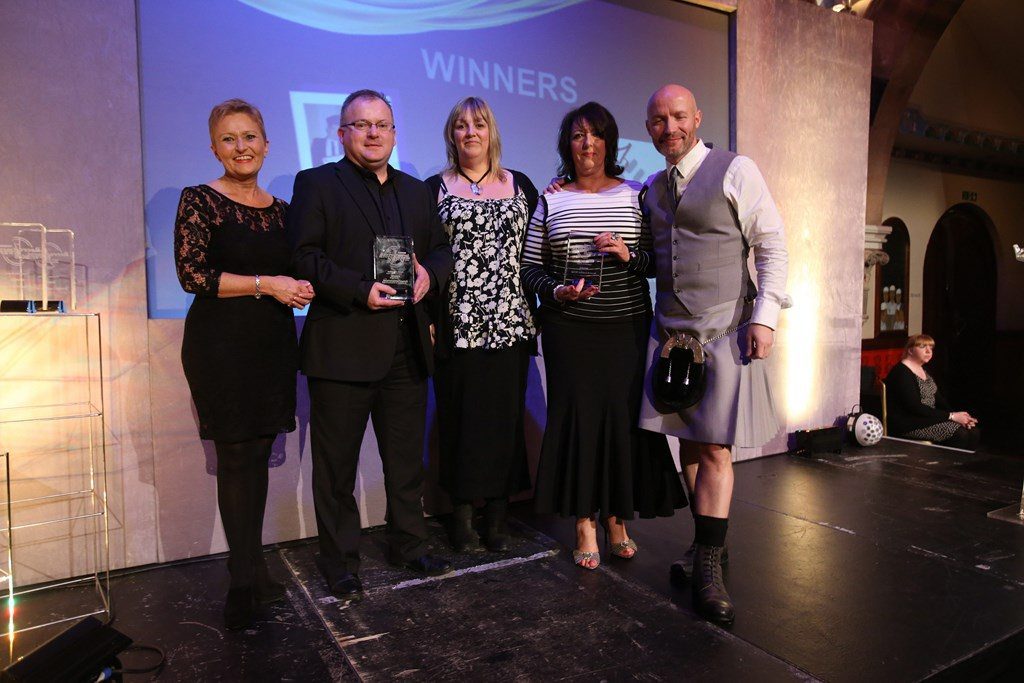 Two schemes run by Renfrewshire Council to give young people a helping hand into the world of work have been honoured at a prestigious national awards ceremony.

The council’s modern apprentice programme was named as the joint-winner of the Apprentice Award at the s1jobs recruitment awards 2013.

The other winner was Renfrewshire-based Scottish Leather Group, which last year launched its apprenticeship academy in partnership with the council-run Invest in Renfrewshire programme, which provided financial support. Invest in Renfrewshire is a £4.5m programme designed to boost the local economy through offering employment and training opportunities to young people and providing financial support to businesses.

Both organisations were also named as joint-winners of the Chairman’s Award, which recognises the groups deemed most deserving over all the categories of the awards.

The ceremony was held at Glasgow’s Oran Mor venue and hosted by telly funnyman Craig Hill.

Councillor Roy Glen, Convener of Renfrewshire’s Council’s Economy and Jobs Policy Board, said: “The local economy and youth employment are two of the main priorities of this council and we have made significant investment in both, despite the tough financial climate.

“The council’s apprentice programme last year recruited 78 modern apprentices – the most the council has ever had at any one time.

“The Invest in Renfrewshire scheme has now provided financial support to more than 100 local businesses. I am delighted to see our partnership with Scottish Leather being recognised with this award.”

Maureen Ross, group HR manager at Scottish Leather Group, said: “We are absolutely over the moon to have won these awards for our academy.

“This is part of our strategy to find the talent which we hope will lead the business to success in the future.

“Our work with Invest in Renfrewshire to help get this project off the ground just shows what effective partnership working can do.

“I would say to other local businesses to get on board with Invest in Renfrewshire if they have not already done so.”

All the council’s modern apprentices are guaranteed to be able to complete their apprenticeships with the council, which supports them through their college placement and relevant vocational qualification.

The candidate achievement rate has been above 95% in each of the past five years. Recruitment is set to begin in the next few weeks for the 2013 intake.

Scottish Leather Group is the UK’s largest producer of leather, and operates across five subsidiaries, three of which are based in Bridge of Weir, plus one in Paisley.

The firm’s apprenticeship academy was launched in 2012 in partnership with Invest in Renfrewshire, Scottish Enterprise and Reid Kerr College.