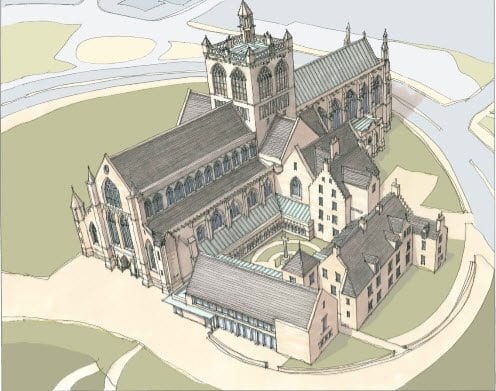 Paisley Abbey is looking to the future. A planning application has now been submitted for a £2 million refurbishment of the Place of Paisley and construction of new visitor facilities and community space on the site of the former fourth cloister, which was demolished in the 1870s as part of a road widening scheme.

Founded as a Cluniac Monastery in 1163 and currently celebrating its 850th anniversary, Paisley Abbey is of major national and international interest. Together with the adjoining medieval Place (Palace) of Paisley, the Abbey complex has a unique place in Scottish history as the birthplace of the Royal House of Stewart and in the development of Paisley throughout the ages.

The Abbey is keen to play its part in the regeneration of Paisley town centre by providing new facilities and offering more for both visitors and residents of Paisley. It will also secure the Abbey’s long term financial sustainability, and therefore the future of this important historic building.

Award-winning Scottish architects Simpson and Brown have produced proposals for an excellent new addition to the Abbey. Renfrewshire Council have supported the Abbey to get to this stage.

The plans include rebuilding the 4th cloister to create a new welcoming entrance to the Abbey and restore the cloister to its original footprint, incorporating medieval stones in its construction. The 4th cloister will provide purpose built space for a larger café/restaurant, shop, heritage interpretation and hall for receptions, exhibitions and conferences. The Place of Paisley will be refurbished with better visitor facilities and more community space.

Drawings of the proposals will be on display in the Abbey’s north transept for the next few weeks.

Reverend Alan Birss, Minister at Paisley Abbey, said: “The 4th cloister project is an exciting initiative which exemplifies the forward-looking vision of the Abbey as we celebrate our 850th anniversary. Along with the offering of worship to God, the welcoming of visitors and being a place that local people look on as ‘their own’, have from medieval times, been at the heart of what Paisley Abbey is about.  I have no doubt that the 4th cloister project will be a great success if we have the support of the whole community of Paisley with us. I commend it warmly to everyone in Paisley”

Douglas Alexander MP, member for Paisley and Renfrewshire South, said “Paisley Abbey has been at the heart of our town for Centuries. I am hugely excited by the 4th Cloister project as it offers the potential to advance both the work and witness of the Abbey and congregation, and the regeneration of Paisley Town Centre. It could be a new landmark for the Town, and a key milestone in the redevelopment of Paisley.”

Renfrewshire Council Leader Mark Macmillan said: “Paisley Abbey looms large in the history and landscape of the town. It’s encouraging that a major project to strengthen its future has reached an important milestone in being submitted for planning permission. Now there will be further consideration and consultation as part of the  planning
process with a view to reaching a decision over the coming months.”

Jenny Humphreys, Simpson and Brown Architect, said “We are delighted to be involved in such an important project.  We have worked closely with the Abbey to develop these proposals, to ensure that it meets all the varying needs placed on such a building. The submission of the Planning Application is a key stage, and we look forward to the next stage and seeing it come to fruition”