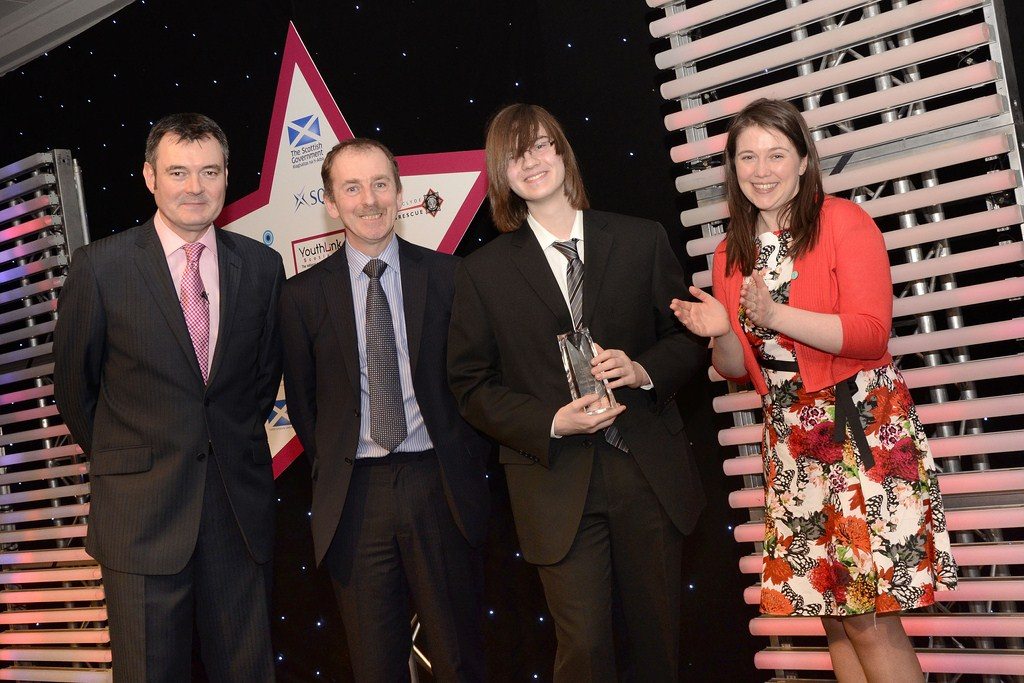 Dedicated volunteers from Renfrewshire have swept the board at Scotland’s youth- work Oscars.

A total of four individuals or groups were honoured at the Youthlink Scotland Awards ceremony, set up to recognise those who go above and beyond to help change the lives of young people for the better.

The big winner on the night was 17-year-old Mark Waters of Erskine Music and Media Studio (EMMS) and Erskine Youth Council, who was named as Scotland’s Volunteer of The Year. Described as ‘a young man with a big heart’ by the team who put him forward for the award, the Park Mains High pupil was praised for his unstinting work to help create a vibrant community of young people in his local area.

Mark is one of a team who have worked with local young people to transform the former Bargarran Community Library into a busy learning centre for young people, offering youth clubs, a media suite, a recording studio and IT facilities.

It was a double celebration for the team behind EMMS, who were named as the winners in the Innovative Practice Team of the Year category.

The runner-up in the Volunteer of the Year category was Dale Irvine, of Paisley, who was honoured for his work as role model for kids at the Beechwood Youth Centre in Shortroods.

Another winner on the night was Isaac Wilkies, who after attending Johnstone Youth Club as a teenager, graduated to being a young leader and has now carried out youth work for Renfrewshire Council for the past 12 years.

The awards – now in their sixth year – saw 33 individuals or organisations from across Scotland shortlisted as finalists for this year’s event.

The event – hosted by DJ Grant Stott – took place at the Crowne Plaza Hotel in Glasgow and was attended by almost 300 youth workers, managers, sponsors and invited guests.

Staff from Renfrewshire Council’s Youth and Sport Services help co-ordinate youth work locally, and nominated the volunteers and staff for the awards.

Councillor Jacqueline Henry, convener of Renfrewshire Council’s Education Policy Board, said: “These volunteers are shining examples of some of the great youth work which is being carried out locally.

“I would like to congratulate them all on these fantastic honours.”

Jim Sweeney, Chief Executive of YouthLink Scotland said: “Once again the National Youth Worker of the Year Awards has given us glowing examples of selfless commitment to the cause of our young people.

“As always, the stories behind the Youth Worker of the Year Awards are truly inspiring.”

March 20, 2013
· What’s On Wednesday newsletter Archive Feed
· Easter family entertainment in Renfrewshire table.mcnFollowContent {width:100% !important;} table.mcnShareContent {width:100% !important;} What’s On Wednesday; news update of shows, events and more in Renfrewshire Easter and school holidays are almost here but fear not, we have plenty of ways to keep the whole family entertained over Spring. Plus there’s now just 9 days left to win a £50 Braehead giftcard. Read on and be our next winner!    Wondering how to entertain your spring chicks this Easter holiday? Paisley Museum and Paisley Arts Centre will play host …

Shoppers in lunchtime munch for Fairtrade
Scroll to top