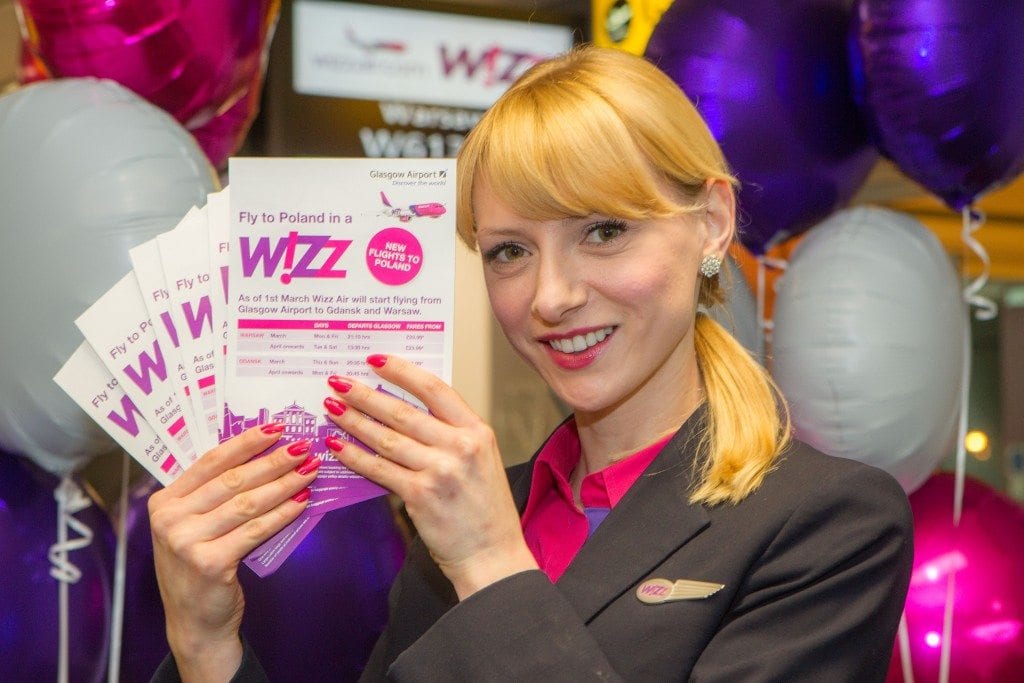 Wizz Air has operated its first
flights between Glasgow Airport and the Polish cities of Warsaw and Gdansk.

Central and Eastern Europe’s largest
low-cost, low-fare airline announced in January that it would be moving its
Scottish operation to Glasgow Airport after operating at Prestwick Airport
since 2006.

Passengers on the inaugural service to
the capital city Warsaw were treated to a spread of Polish delicacies at the
departure gate.

Wizz Air now offers twice-weekly
flights to the Warsaw and the Baltic Sea resort of Gdansk from the more
centrally located airport in a bid to provide more convenience to existing
customers, and attract new passengers form a larger catchment area.

Amanda McMillan, managing director of
Glasgow Airport, added: “We are thrilled to welcome Wizz Air on board which is
yet more good news for Glasgow Airport. Not only will it provide our customers
with greater choice, it will further strengthen our connectivity with some of
Europe’s major cities and it means we can add Poland to our long list of
destinations after an absence of more than 15 years.”

Stijn Vandermoere, Head of Network
Development & Scheduling, said: “Our popular low fares have strongly
grown our business in 4 UK airports and we’re already the number two airline at
one of London’s main airports. We believe there is also significant growth
potential in Scotland and our move to Glasgow International Airport is a step
towards future passenger and route growth.” Wizz Air commenced its pan-European
low-cost operations in 2004 and has since grown to offer over 250 low-fare
routes across 30 countries connecting 84 destinations.

In the UK, Wizz Air offers 37 routes
at very low fares.The company’s aim is to make flying on the West-East axis
more affordable, as well as to provide a new travel experience to all travellers
in Europe.