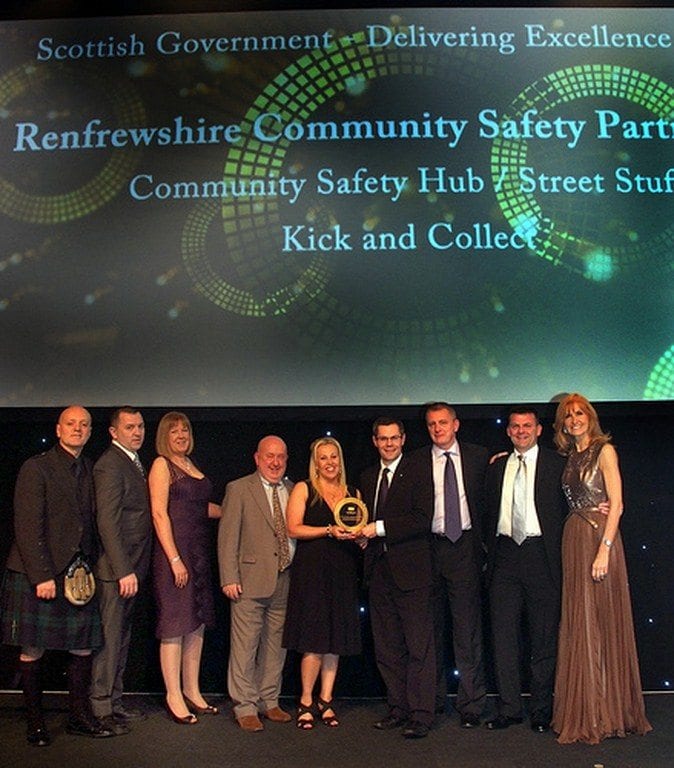 A pioneering project which has successfully reduced youth disorder in Renfrewshire has been honoured at Scotland’s local authority Oscars.

Renfrewshire’s Community Safety Hub and Street Stuff/Kick & Collect was crowned the winner of the Delivering Excellence Award at the COSLA Awards for its work to reduce youth disorder.

Two other Renfrewshire projects were also honoured on the night, with the A Time 2 Mend homeless prevention project and the Support Me campaign to tackle cyber-bullying among youngsters also winning silver in their categories. Renfrewshire Council Leader Mark Macmillan said: “For Renfrewshire to have picked up so many awards is a great achievement for a council of our size.

“The fact these projects have been chosen ahead of competition from across the country for these honours is testament to the good work which is being done.

“I would like to congratulate everyone involved and thank those on the ground who make these projects happen – without whom, we wouldn’t have these awards.”

Street Stuff offers a programme of activities – such as street football and mobile youth activities – for young people at recognised anti-social behaviour hotspots and has dramatically reduced youth disorder rates since it started in 2008.

Kick & Collect is a initiative run by Street Stuff where young people who take part in events such as community clean-ups are rewarded with days out and tickets to sporting events.

A Time 2 Mend is a unique project run by the council’s Housing Advice and Homeless Service team which has reduced youth homelessness.

It has done this by working closely with young people facing homelessness and their families to mediate between them, and by offering support and advice to young people when they move in to a tenancy of their own.

Support Me was set up by Primary 6 and 7 pupils at Gallowhill Primary to help children stay safe on the internet and to tackle cyber-bullying.

The scheme has been designed, planned and managed by the pupils themselves, giving them practical experience while taking on an important issue. www.renfrewshire.go.uk

Come and lock swords with masked superhero Zorro at Paisley Arts Centre this...
Scroll to top
Go to mobile version