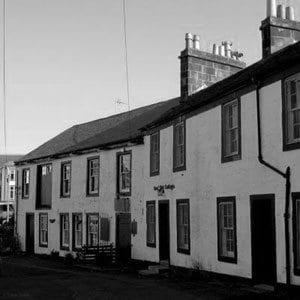 Lanarkshire Paranormal investigated The Sma’ Shot Cottages in Shuttle Street Paisley on September 23rd 2012. Here is the report of the event.

An unlikely location.
There is nothing like the excitement of a large castle or a derelict hospital, the creepy atmosphere adds to the thrills associated with paranormal investigating, but never overlook the small and even cosy-looking places sited around our cities.
We were reminded of this when visiting an unlikely location, The Sma’ Shot Cottages in Paisley. Being a charitable organisation, we agreed to investigate the cottages and open up to the public in order to raise funds for this quaint little location. With a nightclub situated next door and the noise bellowing out, on arrival the team was uneasy about the success of this location and concerns grew as we set up the camera system and got a feel of the place.
How are we going to successfully call out with all that night club noise? And are we all going to spread out enough to get any activity without hearing each other? All this was on our minds, expecting a long and uneventful investigation… how wrong we were.
The teams decided, the cameras rolling, were ready to begin.
The first location was the area nearest the nightclub, the noise was horrendous. People queuing for the bar outside, calling out became more like shouting out (dawning on us now that a Saturday night was not the greatest idea here). After 20 minutes of nothing, we noticed the area getting really dark to a point where the street lights shining into the room through gaps in the window shutters were no longer silhouetting the antique looms and other furnishings in the room. People had to use their night vision cameras now just to see where they were walking. It was then we noticed the small bird cages hanging from the giant wooden looms swinging quite violently.
Being a solid stone floor and everyone far away from the looms themselves, we found this to be quite remarkable as well as physically impossible as there were no draughts, wind or any other elements that could have caused it.
As randomly as it started, it stopped again almost instantly. The light started to come back into the room, people started to report seeing human shapes in corners moving. Maybe we had underestimated this little location.
As the night went on, more shapes and several strange lights on the cameras appeared, not your usual perfect circle “orb like” lights, these had very abstract shapes and patterns.
The team was now in the reconstructed living room/bedroom area, already pleasantly surprised that this small city museum had more activity again – while calling out, again came the darkness. We asked if we were welcome and with an almighty crash the door into this room violently smashed open as if kicked from the other side, startling everyone. The door closed, we asked again and again, the door swinging open with incredible force.
Shadows and uneasy feelings were all around us throughout the night affecting emotions, the ladies feeling incredibly sad and the gentlemen feeling incredible anger. Strange smells of burning and choking were felt and we were only to find out later that there had been a fire in which a child died many years ago.
We left the building speechless and with great feelings of confusion. These are not your average bumps and bangs, not your normal, were they or weren’t they shapes? There is a story in this place, a story that the spirits which still reside in there are trying to show us.
We will return in March 2013 to try to find out what this place is telling us, other than never to underestimate small unlikely locations such as The Sma’ Shot Cottages Paisley.