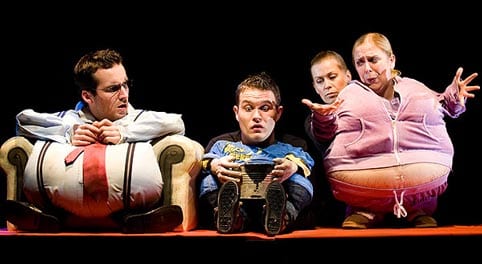 Using remarkable sleight of hand and ‘human puppets’, multi award winning SLICK is a hilarious, dark and dirty exploration of greed, corruption and loss of innocence. The story is told through the eyes of Malcolm Biggar, a nine year old with a passion for his skateboard, a harrowing fear of his lunatic neighbours and a growing realisation that perhaps his parents don’t always have his best interests at heart.

Malcolm’s sole aim in life is to convince his neglectful parents to buy him a helmet for skateboarding. But one day that all changes when crude oil begins pumping out of the Biggar family bathroom. Elation soon turns to desperation as they attempt to keep their new found wealth a secret from their depraved landlord and outrageous next door neighbours; ultimately leading to an explosive showdown that little Malcolm gets caught in the middle of.