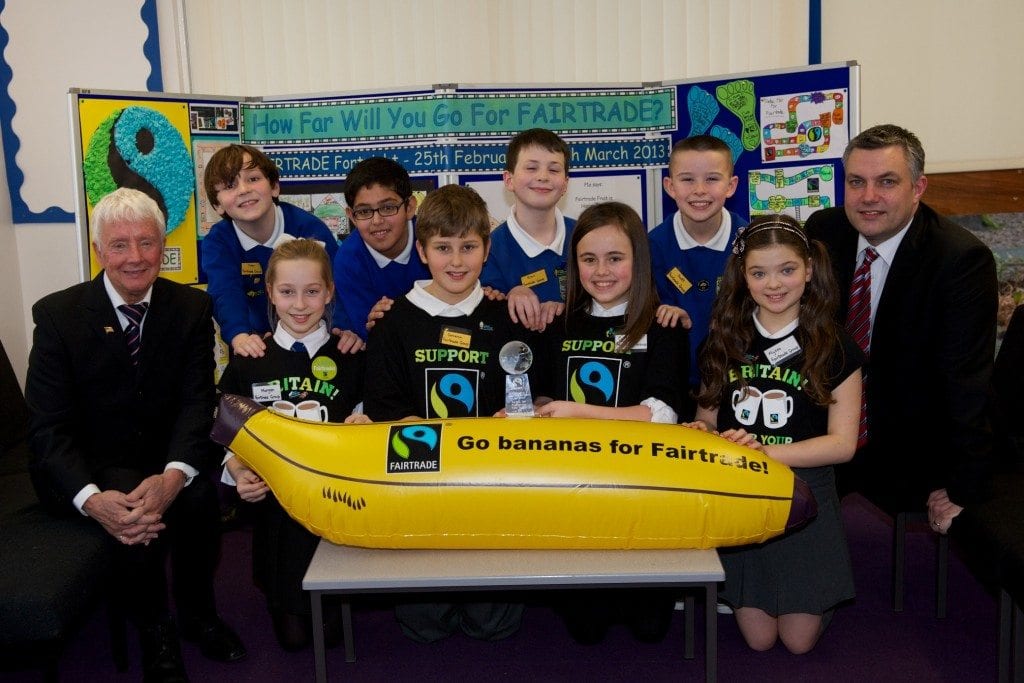 Pupils at a Renfrew primary school are going bananas after being crowned the area’s top Fairtrade school.

Newmains Primary was presented with the McDowell Trophy for 2012 – awarded to the school which has done most to promote Fairtrade in their community. The trophy was handed over by former Renfrewshire Provost John McDowell, who was heavily involved with the promotion of Fairtrade during his time as a councillor.

He was joined by Renfrewshire Council Leader Mark Macmillan, who chairs the Renfrewshire Fairtrade Steering group.

They spoke with some of the pupils about their work, and saw the displays which have been put up around the building.

Fairtrade products are those which ensure producers in the developing world get a fair price for their goods, such as fruit, coffee and rice.

Councillor Macmillan said: “I would like to congratulate all at Newmains Primary, who were very worthy winners of this accolade.

“There is a lot of work going on around Renfrewshire to help promote Fairtrade products and show the difference it can make to the lives of people on the other side of the planet.

“There will be a variety of local events for this year’s Fairtrade Fortnight event, which will run from 25 February to 11 March.”

This is the second year of the trophy, which was won by Clippens Primary in Linwood in 2011.

John McDowell said: “The trophy is there to encourage primary pupils to learn what Fairtrade is all about and I am very pleased they have worked so hard to achieve it.

“I hope the trophy goes on for many years to come. The Fairtrade movement really helps the most deprived people in the world and does a tremendous job.”

Newmains PS head teacher Carol Cooke added: “Everyone at the school is very keen to promote the Fairtrade movement whenever possible.

“Newmains has held many events to help promote Fairtrade over the years, including barbecues, football matches, coffee morning and tuck shops.

“I am very proud of the children and staff for the hard work they have put into promoting this very important cause in so many different ways.”