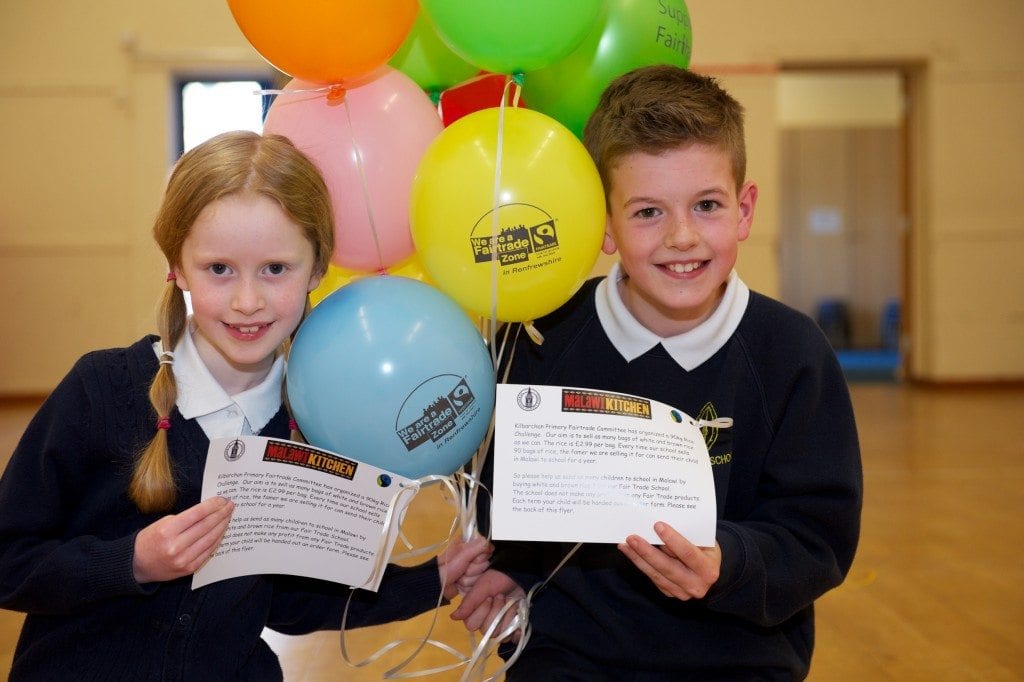 Schools and organisations across Renfrewshire have been trading fair as part of the nationwide Fairtrade Fortnight extravaganza.

The event – designed to raise awareness of the scheme, which guarantees fair prices for producers in the developing world – kicked off on Monday 25 February and runs until 11 March.

Many of the area’s primary and secondary pupils are being asked to think about how they can help improve conditions for poor farmers on the other side of the planet.

Among them were pupils at Kilbarchan Primary, which is running a rice challenge, where pupils will sell Malawian rice to help raise awareness of farmers in the impoverished African country.

Head teacher Liz Somerville said: “The children on the school’s Fairtrade group came up with their own plans and we had a special assembly.

“Every child went home with a Fairtrade balloon, weighted down with an order form for Malawian rice.

“That way, they would be walking about the village with the balloons, meaning people would see them and ask what they were for.”

Elsewhere, various Fairtrade groups around Renfrewshire are banding together to help promote the scheme.

Saturday 2 March will see the second annual big banana walk, in the form of a ‘relay’ from village to village, with members of each local group passing on the banana-shaped ‘torch’.

It starts at Lochwinnoch cross at 9.45am, and moves on to Kilbarchan, then Bridge of Weir and other villages. Along the way, walkers will visit local businesses which serve Fairtrade products.

The Lochwinnoch Fairtrade group will host a special coffee morning on Thursday 28 February at the Junction, while their Bishopton counterparts will do the same at The Cornerstone on Saturday 9 March.

“The recent announcement of Scotland as a Fairtrade nation shows how much people have taken the cause to their hearts.

“There is more information on how you can get involved at www.fairtrade.org.uk.”

Renfrewshire Council is also running a Fairtrade Business of the Year competition, with all local firms invited to show their ethical trading credentials.

Application forms can be downloaded at www.renfrewshire.gov.uk/ftbusiness2013

Recruits get trained up in blaze of glory
Scroll to top