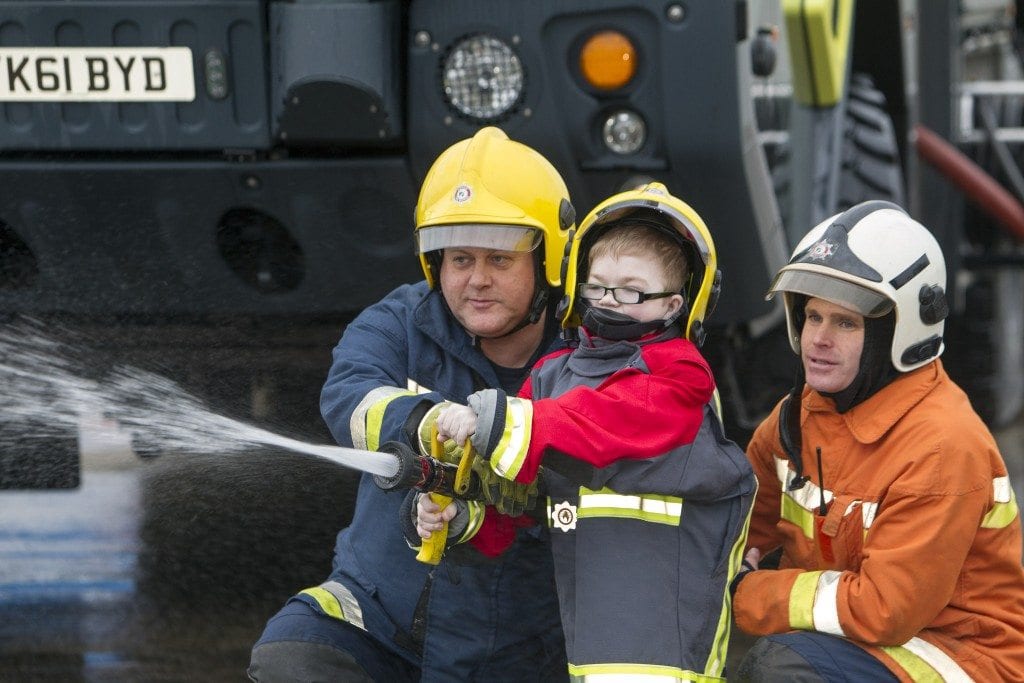 Glasgow Airport has helped a young boy who suffers from rare genetic condition live out some of his wishes.

Zac Borland from Cumbernauld, or ‘Zaction Man’ as he has become known among staff at the airport due to the items on his wishlist, is on a strict programme of medication but was able to forget his troubles during a day of fun with his family.

Asked what he would like to do most, Zac’s responses included: fly in an aircraft, put out a real fire with some firemen, and dash round Hamley’s toy store.

He and his family – mum Trudi, dad Ronnie and sisters Kim and Jenny – were collected from their home by in a chauffeur-driven limousine. At this stage Zac had no idea what was in store.

They were driven to Glasgow Airport where they were taken out on the airfield by the fire service. Zac and his sisters got behind the wheel of the airport’s new ‘Panther’ fire appliances and doused a real fire with the powerful hose.

The family then had lunch at Frankie and Benny’s before heading into Glasgow where Zac, Kim and Jenny dashed round Hamley’s, grabbing whatever they wanted.

After the excitement had died down, mum Trudi said: “It was amazing. Zac went into school the next day and one of the teachers asked him about it. His answer was something along the lines of ‘there are no words to describe it’.

“He absolutely loved being out with the fire crew and he has not stopped talking about it. His prized possession is the helmet they gave him. The girls loved it too.

“The whole day was fantastic from start to finish and although Zac was quite shy to start with, his smile got bigger and bigger as the day went on. It was lovely to see him just being a wee boy having fun, without having to worry about his condition.

“We would like to thank everyone, including those behind the scenes, who made this possible as it made our family feel so special.”

Unfortunately Zac was unable to fly on an aircraft due to unfavourable weather conditions, but is set to return in 2013 to fulfil this particular wish.

Flybe has also gifted the family, who have never flown before, complimentary flights to any of their UK destinations in 2013.

Trudi added: “Zac is so looking forward to that as well. The first thing he tells everyone is ‘I’m going to have a flying lesson’ and he has started to wind up one of his friends, who wants to be a pilot.”