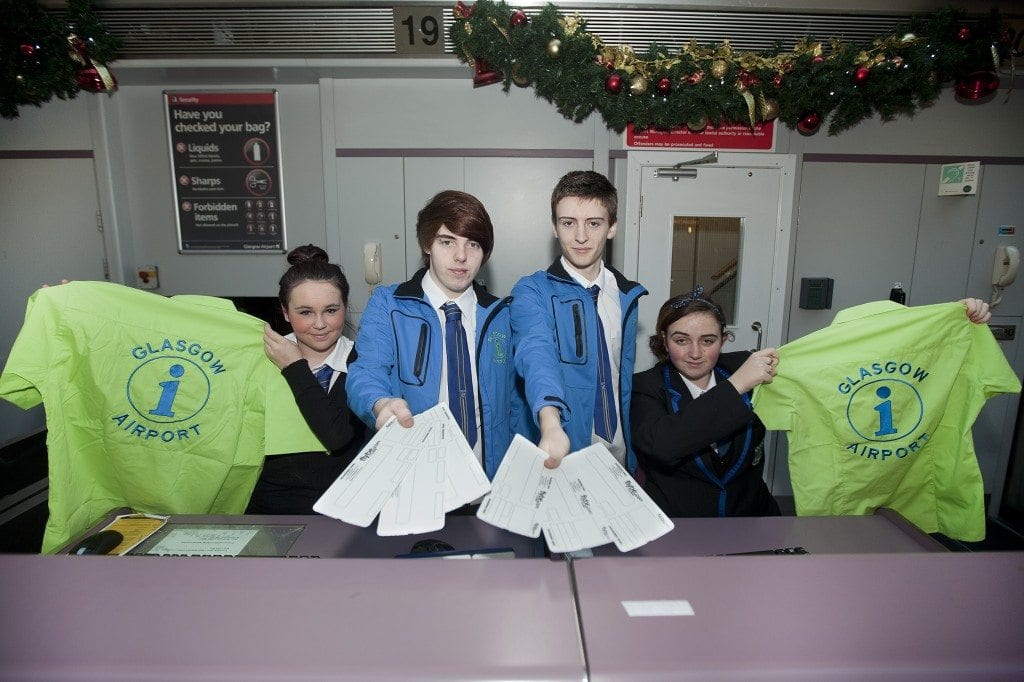 Glasgow Airport gets pupils’ tourism careers off to a flier

Scotland’s next generation is learning about career opportunities in one of the country’s largest and most important industry sectors thanks to Glasgow Airport.

The £40,000 cost of a project designed to introduce young people to the opportunities available in the hospitality and tourism sectors is being met by the airport’s Challenge Fund.

The aim of the Skills for Sustainable Tourism project, which has been created by the charity Scottish Business in the Community, is to encourage these young people to move into education, training or employment when they leave school.

Glasgow Airport is also playing an active role in the project and has already hosted a group of 15 pupils from Renfrew High School, with two more visits to follow in 2013. The youngsters took part in an interactive session covering the wide range of jobs and career progression opportunities available at the airport.

With Glasgow Airport employing only a tenth of the 4,500 workforce on-site, business partners British Airways and World Duty Free also took part to give the pupils an airline and retail perspective.

As the goal is to enable the youngsters to learn about every aspect of the tourism and hospitality industries, and increase their awareness and opportunities, the airport visit is just one of several facilitated by SBC including Glasgow 2014, Holiday Inn, Intercontinental Hotels and Rabbie’s Tours.

Campbell Mackinnon, Glasgow Airport’s operations director, took part in the recent session with the children. He added: “This programme encompasses everything that the Challenge Fund is about. It recognises the importance of tourism and hospitality in Scotland, particularly with the Commonwealth Games, Ryder Cup and Homecoming all taking place in 2014.

“It also provides opportunities for learning and raises the aspirations of these young people, who clearly enjoyed their visit to the airport. We look forward to welcoming the next groups here in 2013, and hopefully to some of them taking up employment here in the future!”

Bob Christie, SBC’s regional manager for Glasgow, said: “It is fantastic that a high-profile business such as Glasgow Airport, which directly and indirectly supports thousands jobs in tourism and hospitality, is funding this project in its entirety.

“The risk of young people leaving school without employment, education or training is particularly acute during an economic downturn, but there are opportunities available in tourism and hospitality which we believe can provide a route to both work and skills development.

“By funding and participating in this programme, which is focused on achieving positive outcomes for those taking part, Glasgow Airport is investing in the future of the young people in its community and the future of tourism in Scotland.”