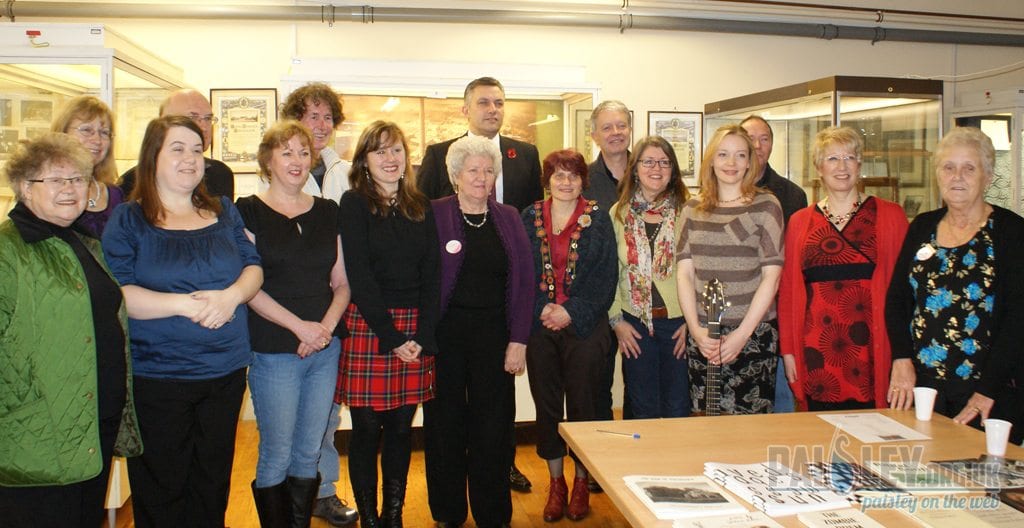 Musical Mills, held at the Thread Mill Museum on Saturday 3 November and compered by Tracy Patrick and Dave Manderson, hosted a packed programme of poetry and words, music, art and heritage – raising awareness of the industrial heritage and the Museum that charts the thread industry. The Museum was full as all ages were entertained for the afternoon, including archive footage playing on the screen.

Premieres galore filled the day. Sandy Stoddart’s maquette of the William Gallacher Monument graced the venue, with the young, elegant Mill Girl seated by Willie Gallacher – Paisley’s man of conscience who was ‘admired for his honesty, humanity, humour and selfless devotion to principle’. Donations are welcome to make this sculpture a reality on the High Street!

The inspiration of the Mill Girl Poets had resulted in a song commission by Weaving Musical Threads (WMT) from Anna MacDonald –  the very artiste who sang over the rooftops of Paisley from the Observatory balcony during the WMT festival in March – ‘Looking back down, History’s fine thread….the Mill Girls the most radical of all’. Anna especially travelled up from London to be with us and premiere her song.

We heard words of poetry with three of the Mill Girl Poets (Tracy Patrick, Mo Blake and Kathryn Daly) appearing from all parts of the Museum reciting their work, such as ‘Half Timer’s School’, ‘Anchor Mill Strike 1907’, ‘May 1904’, ‘Open the Gates’, ‘A Streak of Gallus’ and ‘Anchor Mill’. Renowned local writers and prize winners also entertained – Dave Manderson, Graham Fulton, Ray Evans, G W Colkitto and (recently launched from the Titan Crane, from our sunny Glasgow suburb) the writer of working life, Brian Whittingham.

The WMT clay sculpture and panel was revealed for the first time – a legacy from Karen James’s clay workshop when in March the audience and participants of the WMT festival made their marks in clay.

There was a Gerry Rafferty theme, as Pauline Vallance, solo artiste who launched a beautiful new CD the night before and of Lochwinnoch Arts Festival, performed ‘Whatever’s Written In Your Heart’ on clarsach. Could this have been a world’s first?

Jim Gilbert, one half of ‘Wing and a Prayer’ and a once close friend of Danny Kyle, also paid tribute to the Paisley buddie.

We were delighted to welcome the Leader of the Council, Mark MacMillan, who pledged his support for the upcoming collaborative work with the Mill Girl Poets, Weaving Musical Threads and Renfrewshire Council, to take heritage work into the local schools.

Our hosts, the Thread Mill Museum, we gratefully thank, as well as Create for their sound and recording assistance.

The day was supported by the University of the West of Scotland, The Co-operative Membership and Weaving Musical Threads.

All Paisley Photographs taken by Tracey Clements for www.paisley.org.uk