I would just like to thank everybody who voted for Paisley on the Web www.paisley.org.uk in the RBS Community Force Awards 2011.

We can now announce that we have won our category and that we will receive over £6,000 to purchase much needed equipment for the group of volunteers at Paisley on the Web, ensuring that we can attend events and special occasions in the Paisley and Renfrewshire calendar and promote them via our website and social media.

The money will also be used to train volunteers who are currently out of work and also our younger volunteers. They will not only be taught how to use the equipment, they will also gain much needed skills for future employment.

We would like to thank not only the volunteers who gave up so much of their time campaigning for this award but their friends and family and every single one of you who voted, not just for Paisley on the web but for every cause in the Paisley area.  This award will help us promote each of the organisations involved to a wider audience and we congratulate each and every one of them.

In our eyes any group or organisation in Paisley which is trying to promote the area has also won. We will be contacting them to see if we can assist in any way in highlighting their group and will use our new equipment to promote them to the best of our ability. I would like to also take this opportunity to thank the Royal Bank of Scotland for this award and can assure them that their contribution to the community and area will be put to best use.

You can find out more about Paisley on the Web and RBS Community Force by visiting this page: http://communityforce.rbs.co.uk/project/208

WARD 15 RAH – SUPPORT THE KNOW CAMPAIGN ON THE 30TH

The campaign against the closure of Ward 15 at the RAH continues apace.

If you are able to support us on the 30th November, our campaign is joining a march and rally through Paisley on Wednesday morning.

The march and rally has been organised by the STUC in opposition to attacks on pensions.

The organisers have invited us to bring our banners and provide a speaker at the rally – Sandra Webster will speak at the rally on behalf of the KNOW campaign.

Please join us, bring along the kids, friends and anyone else you can.

Paisley
March and Rally Assemble: Brodie Park, Paisley at 10.30am
March: 11.00am reaching Rally: County Square.
A shuttle bus will travel between Cotton Street and Brodie Park from 9.00am to 10.00am
John Kelly
KNOW CAMPAIGN

Young football fans from across Renfrewshire could score themselves an early Christmas present and win the chance to share a pitch with some of their SPL heroes.

Youngsters aged 10 – 16 are being invited to take part in a Street Football tournament on Saturday 10 December.

The winning team in the 13 – 16 age group will then get the chance to take part in a half time 10 second challenge on the first team pitch at the St Mirren V Rangers match on Christmas Eve.

The top two teams in the 10 – 12 age group will get the chance to play a small sided game during half time at St Mirren and Dundee Utd match on December 28.

The tournament is being run as part of the popular Street Stuff programme which is a hugely successful youth diversion activity programme which has helped contribute to significant reductions in youth disorder in communities across Renfrewshire.

The programme has this year expanded to encourage local young people to give back to their communities.

The Kick and Collect scheme encourages the teenagers to give back to communities and in return get the chance to take part in more activities.

St Mirren Manager Danny Lennon said: “This is a great opportunity for young people to get on the pitch in front of a packed crowd at a major SPL game and test their skills. It’s a bit of fun as well as a great way to get young people involved in giving something back to their communities and be a positive example to others.”

All teams taking part in the street football tournament on Saturday 10 December must take part in a community clean up scheme.

Councillor Kenny MacLaren, Renfrewshire Council’s Community Safety Spokesperson, said: “Street Stuff has been a huge success since it started three years ago and now it’s expanding to not just get young people taking part in positive, healthy activities but also to get them giving back to their communities. The Kick and Collect Scheme is a great way to show our appreciation for their hard work.”

To find out more information or get a form contact Stephen Gallacher on 07557281581 or stephen@saintmirren.net.

Tickets for Historical Adventures Youth Theatre’s ‘Jack and the Beanstalk’ are now on sale. They will be performing this fun filled pantomime at St. Aidan’s Church Hall, Tower Road, Johnstone. The dates and times are: Friday 2nd of December 7.30 p.m., Saturday 3rd of December 2.00 p.m. matinee and 7.30 p.m. Ticket prices are: Adult £4, child £2 and family £10. (Family Tickets cover 2 adults and 3 kids). To book your tickets please call the box office on 07842 709 598 or email me at david.ororke@historical-adventures.co.uk. Hope to see you all there!

You can download the Poster right here by pressing this link.

£10 for adults, £5 for children, £20 for platinum ticket including drinks reception and priority seating.

Join us at the stunning Paisley Abbey to celebrate Christmas with an evening of carols and readings, hosted by BBC Scotland’s River City star Eileen McCallum.

END_OF_DOCUMENT_TOKEN_TO_BE_REPLACED 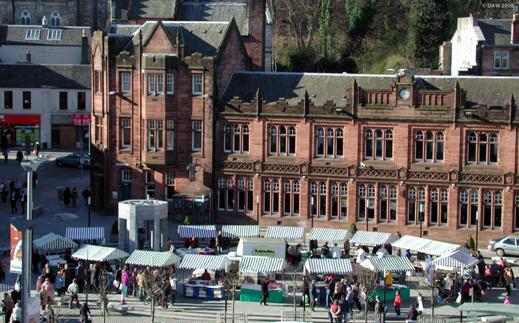 Please note that due to weather warnings the Paisley Farmers’ Market tomorrow (Saturday 26 November) will run a reduced market from 8.30am to 12pm (weather permitting)

Thirty Renfrewshire girls rolled up their sleeves earlier this week to take part in the area’s first ‘opt in’ rugby academy and give the sport a try.

Youngsters from primary 6 through to sixth year were given expert coaching from the council’s rugby development officer, Lindsey Smith, who also plays for the Scottish women’s team.

They also heard first hand how enjoyable rugby is from two local teenagers who only took up the sport this time last year – and now make the national under-20s team.

Amanda Moore (from Paisley) and Lauren Hagan (from Bridge of Weir), both 17, were coached in the sport for the first time last year at a rugby development day and now play for the Scottish women’s under-20s team.

Lindsey said: “Rugby is a fantastic sport. It helps youngsters develop key skills such as decision making and working as part of a team while encouraging them to be active and gain fitness and strength.

“As a female rugby player and coach, I think it’s really important that girls realise that rugby is very much a sport they can take part in and enjoy. The academy was fantastic and I was delighted that Amanda and Lauren came along and show the younger girls just how fun rugby is.”

While girls’ rugby sessions have taken place in Renfrewshire as part of school PE – this is the first time an ‘opt-in’ academy has taken place. It includes learning the laws of the game, learning to run and avoid tacklers and tackle techniques.

The academy will continue into the New Year on Wednesday afternoons at Castlehead High. Anyone interested in taking part should call 0141 842 3000.

Councillor Susan McDonald, Renfrewshire Council’s Sports Champion, said: “The girls’ rugby academy is a wonderful idea. There’s an ideal sport out there for everyone, and I’d urge Renfrewshire girls to give rugby a try. Who knows? You could enjoy the sport as much as Amanda and Lauren and get to be part of the national team one day.”

Our campaign, along with Maura Currie, (@mauracurrie & @paisleyorguk ) has been resolved by Dobbies and Santa will now appear in the Paisley store, here is the press release from the Dobbies Facebook page. This decision was taken after intense campaigning via Twitter and Facebook with the help of the Paisley Daily Express’s Alison Rennie. We spoke to Amanda from Dobbies Garden centre’s press team who confirmed that they have now reversed their decision for Santa to not visit the store, and he will now be appearing on the dates below.

Thanks everyone for all your comments on Santa at Paisley. We value our customers’ opinions and as a result of your feedback we are delighted to announce that Santa will be coming to the Centre on Saturday 3rd and Sunday 4th December. This free festive family event will run across weekend, where children can meet the big man in red and receive a free gift – we hope this event will add some festive cheer for our loyal customers at Paisleyahead of the stores closure at the end of the year. https://www.facebook.com/DobbiesGC

A Renfrewshire company that sparked interest from Hollywood star Tom Hanks over its latest hi-tech project has welcomed a rising star at Holyrood.

Since its launch, Meso has worked on more than 40 projects for clients across a range of sectors, including food and drink, medicine and consumer products.

Its latest collaborations include Popa, which transforms the iPhone into an instant camera, and MoviePeg, an easy to fit stand that allows users to watch movies on any smartphone and tablet device. Both products were developed by Manchester based Beep Industries with design support from Meso.

Another product, a portable camera dolly for film makers, designed on behalf of Paisley based Glidetrack, is due for release in the next month.
Meso’s growing client list of high profile clients includes SECC, Glasgow School of Art, Whyte and Mackay, Famous Grouse, Thales and Courvoisier.
And from next year, Meso intends to design, manufacture and market its own range of products, and expand into new premises in Renfrewshire.
Meso director Danny Kane said: “We were delighted to welcome Derek Mackay to meet the team at Meso. We’re a relatively small company, proud of our association with Renfrewshire, and ambitious for the future. We’d like to think that, in our own small way, we’re helping to establish Renfrewshire as a centre of excellence for product design and manufacture.

Derek Mackay MSP said: “I am thoroughly impressed by the work that Meso are doing, and from what I have seen during my visit, it is not surprising that there has been strong demand for their services and products.

“Renfrewshire is increasingly becoming a fantastic place for business growth and success, attracting business from both the local area and from further afield.

“This is a thriving local company, I’m pleased to see them expanding into new premises to support their growing business and I wish them all the best with their future success.” END_OF_DOCUMENT_TOKEN_TO_BE_REPLACED

Jack and the Beanstalk is running from Saturday 26th November to Saturday 3rd December in Johnstone Town Hall.
Tickets £9/£8 with a special ticket price on Monday evening and Thursday matinee – just £5!

Evening performances start at 7.30pm and matinees on both Saturdays start at 2pm.

The Paisley.org.uk team will be down at the St. Mirin Catherdral Car Boot Sale which is taking place tomorrow (19th November) from 9am till 12 noon

We have booked a car park space and will be selling various items including books, bric-a-brac, Pictures, CD’s and more, All proceeds will go to paisley.org.uk to help us promote the town in a positive way.

Come along and grab yourself a bargain !

END_OF_DOCUMENT_TOKEN_TO_BE_REPLACED

Our restaurant has a history dating back to the sixties, making it one of the first Chinese establishments in Paisley.

The original restaurant was called “China” later renamed “Kwang Tung” in 1982.  The current proprietors took over management of the establishment four years later.

Since that time this family owned and run establishment has grown in reputation and popularity for its Authentic Chinese Cuisine, Varied European Dishes and large selection of quality wines, beers and spirits. END_OF_DOCUMENT_TOKEN_TO_BE_REPLACED